NCCOS efforts to provide early warnings as well as effective monitoring and forecasting of harmful algal blooms through the use of the ImagingFlow Cytobot (microscope-in-a-can) and the Environmental Sample Processor (lab-in-a-can) were highlighted at a recent NOAA Emerging Technologies for Observations Workshop convened by the NOAA Observing Systems Council. 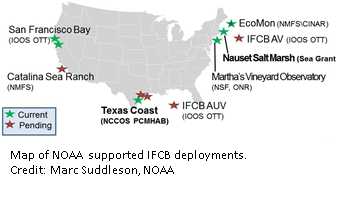 Two presentations in particular detailedhow NCCOS HAB advances are being leveraged to tackle a number of NOAA mission areas. Marc Suddleson (NCCOS) provided an overview of the development and operation of the Imaging Flow Cytobot (IFCB) by NCCOS partners at the Woods Hole Oceanographic Institution and Texas A&M University. He shared examples of successful early deployments supported by NCCOS sponsored research and outlined planned expansion of IFCB-based HAB early warning to other Texas locations. A map (inset) provided evidence of broad agency interest in this emerging technology. 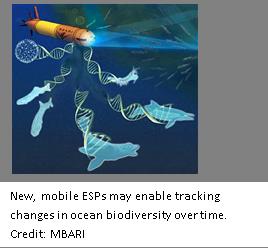 A talk by Kelly Goodwin (OAR/AOML) on the second (2G) and third generation (3G) Environmental Sample Processor (ESP) featured HAB toxin assays developed by NCCOS and successes from HAB cell and toxin observations from ESP deployments by NCCOS and partners in Lake Erie, Puget Sound, along the California and Washington coasts, and in the Gulf of Maine. Advances by NCCOS and partners at the Monterey Bay Aquarium Research Institute on buoy-based 2G ESP and the AUV-based 3G ESP are being leveraged by other NOAA scientists to study higher trophic levels via eDNA and other cutting-edge approaches.

The NOAA Emerging Technologies Workshop was the first of a series of planned workshops aimed at instilling agility and infusing new technology in the NOAA observing system portfolio. The workshop goal was to promote broader awareness of emerging observing technologies, both sensors and platforms, which can be leveraged and transitioned to operations.

Presentations and other workshop materials are available online.

Underwater Grasses Can Improve the Acid Balance in Chesapeake Bay