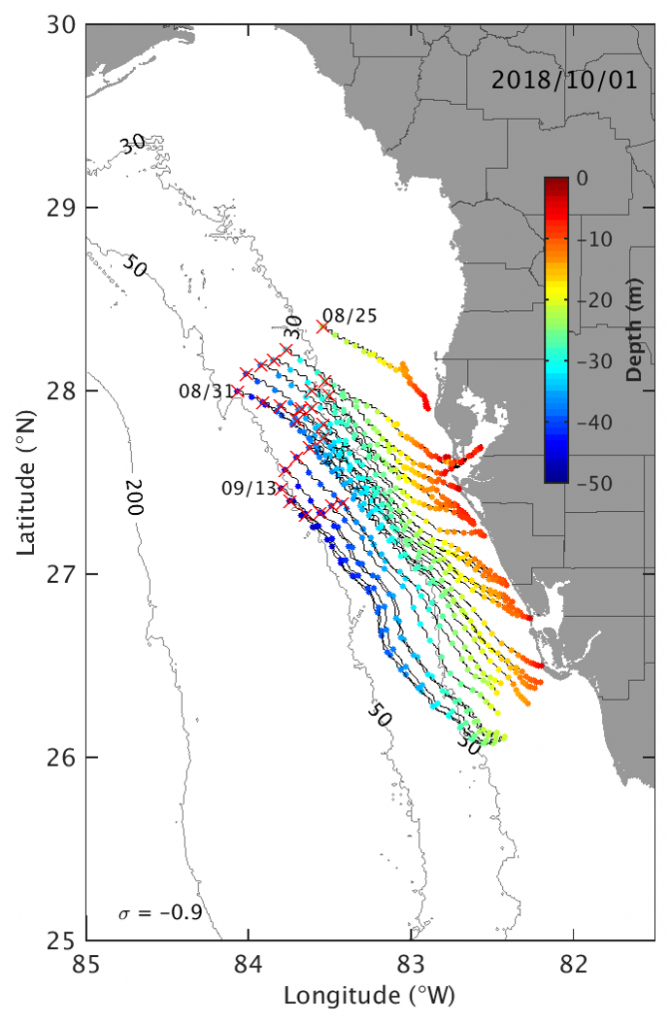 Red Tide Transport to the Coastline. Given observations indicative of K. brevis red tide, where would these cells go if transported by the circulation? Dr Weisberg and his team applied their West Florida Coastal Ocean Model to track simulated particles in 3-D. Beginning near bottom when the glider was at each of the red X designated locations, the colored lines are the particle trajectories and depths ending on 10/1/18. All of the near bottom particles approached the coastline from northern Pinellas County to Lee County, consistent with the mid-shelf initiation hypothesis (Credit R. Wesiberg, USF)

A persistent harmful algal bloom of Karenia brevis, called a red tide, continues to kill fish, cause respiratory irritation for beach goers, and close shellfish harvesting.  It is also the most likely cause for the deaths of manatees, dolphins, birds, and turtles.  Florida’s coastal residents remain alert and concerned, and want to stay informed of the bloom and its effects. On November 16, 2018, Mote Marine Laboratory and Aquarium, and the Barrier Island Parks Society co-sponsored a free public forum to discuss the status and science of the red tide.

The Boca Grande Red Tide Forum featured experts Vince Lovko, Richard Pierce, and Tracy Fanara from the Mote Marine Laboratory and Aquarium, Kyle Abbott of the Clinic for the Rehabilitation of Wildlife (CROW), Jennifer Hecker of the Charlotte Harbor National Estuary Program, and Robert Weisberg of the University of South Florida. Each speaker gave a 10-15 minute presentation and participated in a panel discussion afterward.

At the forum, Dr. Robert Weisberg, a distinguished NCCOS sponsored scientist, discussed what scientists do and do not know, and what we can do about red tides. He noted that scientists believe blooms of K. brevis on the West Florida continental shelf occur naturally, and they likely begin at depth in nutrient-poor offshore waters before they are transported to the coast. A complex sequence of oceanographic events contribute to red tide formation, and in any given year, a red tide may or may not be facilitated by the coastal ocean circulation. Once a bloom occurs, an upwelling circulation transports K. brevis cells shoreward along the bottom. Scientists still do not know if humans exacerbate K. brevis blooms, what factors end K. brevis blooms, and how their effects can be mitigated.

Concerning what to do about red tide blooms, Dr. Weisberg recommended more observations, the coupling of modeling and biology, laboratory and microcosm mitigation experiments, and engineering solutions to solve the man-made problems that may allow blooms to persist in the coastal environment. To learn more about the origins of red tides, Dr. Weisberg recently deployed a robotic sampling glider from August 24 to September 17, 2018, to map water properties over the entire water column within the hypothesized K. brevis red tide initiation region. Glider data was incorporated into a West Florida Coastal Ocean Model to track simulated red tide particles in 3-D.

The Boca Grande Community Center, Boca Grande, Florida, was the venue for the forum and a reception. 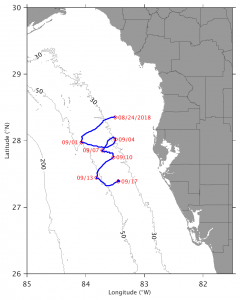