The Bonnet Carré Spillway is a flood control operation designed to divert the nutrient-rich waters of the Mississippi River into Lake Pontchartrain when river water levels get too high, in order to reduce stress on the levee system of New Orleans and prevent flooding. The Spillway has been opened 15 times since its inception in 1937, four of those times have occurred in the last 3 years, including this week.

Freshwater inputs from the spillway have been shown to substantially change the chemistry and ecology of the lake. Previous spillway openings have been associated with toxic cyanobacteria blooms, and there is a concern that blooms could occur in shoreline areas utilized by the public, possibly exposing people and/or their pets to harmful levels of algal toxins. The NCCOS Harmful Algal Bloom Monitoring System is providing satellite remote sensing imagery to monitor for potential cyanobacterial blooms in Lake Pontchartrain, and inform decisions about sampling. Thus far no blooms have been detected in the imagery.

Monitoring will continue until all bays connected to the spillway have been closed. Thus far, only 10 of the 350 bays in the spillway are open, limiting the volume of river water entering the lake relative to last year. This is the second year that NCCOS has provided satellite imagery to help monitor for potential blooms. 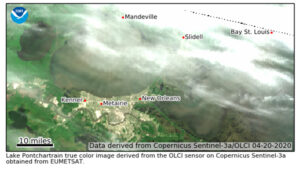 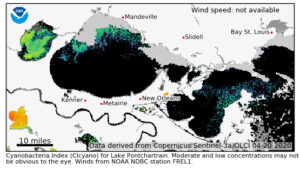 This satellite image shows the same image after being processed, i.e. analyzed with the derived cyanobacteria detection algorithm. Warmer colors (yellow, orange, red) indicate increased concentrations of cyanobacteria, these are visible in the lower left portion of the image in Lac des Allemands. Black indicates areas with no discernible levels of cyanobacteria. Credit: NOAA derived image from Sentinel-3A satellite.

The NCCOS Harmful Algal Bloom Monitoring System routinely delivers near real-time products for use in locating, monitoring and quantifying algal blooms in coastal and lake regions of the US.