NOAA's National Centers for Coastal Ocean Science provided a HAB Event Response award of $12,900 to the Louisiana State University (LSU) and the Pontchartrain Conservancy (formally Lake Pontchartrain Basin Foundation).  This award will fund their efforts to monitor shoreline areas commonly used for recreation around the lake for levels of algal toxins that could be harmful to people or their pets during recreational use. The NCCOS Harmful Algal Bloom Monitoring System is also providing satellite remote sensing images of the cyanobacterial blooms to inform decisions about sampling. 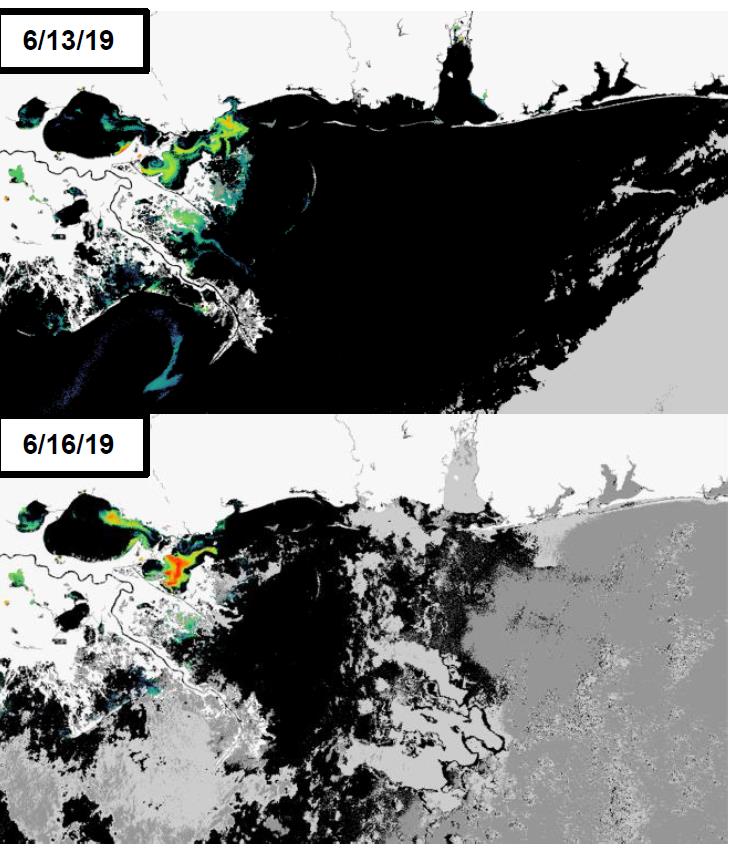 Satellite Image The red areas show the peak of the cyanobacterial bloom in the Lake Pontchartrain and Lake Borgne regions (dark areas at upper left. The Gulf of Mexico is the large dark area to the right. The Mississippi River Delta (aka bird's-foot delta) is the NW-SE protruding light colored land mass at left-center. Credit NOAA derived image from Sentinel-3A satellite.

This bloom originated from the introduction of large volumes of nutrient-rich fresh river water, from the opening of the Bonnet Carré Spillway, into the lower nutrient, estuarine Lake Pontchartrain. Freshwater inputs from the spillway have been shown to substantially change the chemistry and ecology of the lake. Spillway openings can rapidly depress lake salinities, causing most of the lake to become fresh which can persist for several months, when seasonal weather or tropical activities introduce saltwater from the Gulf of Mexico into the lake. Preliminary field results investigating the bloom composition identified the abundance of cyanobacterial species known to produce a variety of cyanobacterial toxins. These toxins have the potential for causing human illnesses. Previous spillway openings have been associated with toxic cyanobacteria blooms, and there is a concern that blooms could occur in shoreline areas utilized by the public, possibly exposing people and/or their pets to harmful levels of algal toxins.

LPBF and LSU will conduct weekly field water quality monitoring, sample collection, and analysis. Monitoring will occur at sites along the north and south shorelines of Lake Pontchartrain. The sampling effort will be aided by NOAA providing imagery from the Sentinel-3 satellites. These satellites measure coastal water color, which shows the location of harmful cyanobacteria blooms. If significant blooms are detected in the lake using satellite images, monitoring intensity will be increased, with more frequent, weekly monitoring at baseline sites as well as additional sites. Monitoring will continue after the spillway is closed, when an expected decrease in turbidity throughout the lake would be conducive to widespread algal growth, until the end of summer. By then the likelihood of a bloom and the risk to people and pets is expected to be low due to decreasing water temperatures and increasing salinities that are unfavorable to the growth of toxic cyanobacteria.

This award will fund HAB identification and counts and biotoxin analyses for duration of the event; samples will be collected for later nutrient analyses. LSU and LPBF researchers and staff will work closely with Louisiana Department of Health, Environmental Protection Agency, and U.S. Army Corps of Engineers to closely monitor the severity of the bloom and potential public health impacts.

The NCCOS Harmful Algal Bloom Monitoring System routinely delivers near real-time products for use in locating, monitoring and quantifying algal blooms in coastal and lake regions of the US.

Toxic Alga Dinophysis an Emerging Threat to Human Health and Fisheries in U.S.