Home > Explore News > NCCOS Leads from Research to Application for Rapid Biotoxin Screening
: A 96-well ELISA plate. Using an ELISA plate, an antibody linked to an enzyme will recognize a target protein (antigen) at the bottom of a 96-well plate. When a colorimetric substrate is added to the sample, an enzymatic reaction will occur, causing a color change that allows the identification and quantification of the target protein (e.g., toxin) using a spectrophotometer. (Photo credit: Shenzhen Boomingshing Medical Device Co., ltd)

NCCOS Leads from Research to Application for Rapid Biotoxin Screening

Biotechnology that harnesses the natural biochemical systems of animals can be used to detect pathogens and toxins in environmental samples. NCCOS has supported the development of biotechnology to identify harmful algal bloom (HAB) toxins that contaminate shellfish. These methods allow a large numbers of shellfish and seawater samples to be rapidly screened for the presence of toxins, reducing time and thus the economic losses that often occur while waiting for laboratory results.

A method pioneered by NCCOS for screening HAB toxins uses antibodies generated by the mammalian immune system. Foreign substances in the body (called antigens) trigger the production of proteins (called antibodies) that chemically bind to the antigens and render them harmless. When coupled with enzymes that produce a measurable color change, the immunological reaction can be used to measure the amount of an antigen (i.e. the toxin) present in an environmental sample. Antibody-based toxin detection methods, like the enzyme-linked immunosorbent assay (ELISA), are suitable for screening large numbers of shellfish and seawater samples to assess whether toxins are present at levels that may poison shellfish consumers.

The ELISA is relatively simple, inexpensive, and quick, especially for large numbers of samples. ELISA provides a simple positive or negative result (yes or no), indicating whether a sample exceeds a specified limit for the toxin class of interest or a toxin equivalent value. ELISA is a cost- effective useful screening tool, but is often most useful when the presence of specific toxins are confirmed by other methods (e.g. LC-MS/MS to determine individual amounts of specific toxin congeners or the Mouse Bioassay (MBA) for shellfish regulatory decisions regarding brevetoxins. ELISA kits are commercially available from multiple sources. 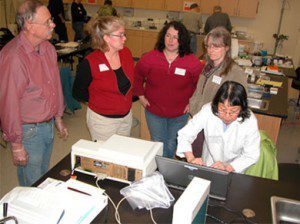 NSP/Brevetoxins: Neurotoxic shellfish poisoning (NSP) is caused by consumption of molluscan shellfish contaminated with brevetoxins primarily produced by the dinoflagellate, Karenia brevis and some other Karenia species. NCCOS used a dual approach for ELISA NSP brevetoxin screening development. NCCOS scientists at the NCCOS Charleston Laboratory developed an ELISA method for brevetoxins in vertebrate animals using blood collection cards in combination with an ELISA test kit. The project was in partnership with AgResearch, Inc. (New Zealand) with the ELISA test kit made available commercially from Abraxis, inc. (Warminster, PA). The Abraxis ELISA test kit has been used to successfully detect brevetoxins from a wide variety of vertebrate wildlife including sea turtles, seabirds, and marine mammals; the presence of specific brevetoxin congeners was confirmed using LC-MS/MS.

The NCCOS Competitive Research Program (CRP) took a separate path for screening brevetoxins in shellfish via ELISA. CRP’s Monitoring and Event Response for Harmful Algal Blooms (MERHAB) sponsored researchers at the University of North Carolina Wilmington for two consecutive projects:  in 2002-2004,  “Immunoassay for Florida Red Tide Monitoring” and in 2005-2007 the “Detection, toxicity characterization of brevetoxins and brevetoxin metabolites and validation of the ELISA as an alternative to the regulatory mouse bioassay for shellfish monitoring”. These projects led to the commercialization of the ELISA method for shellfish by MARBIONC Development Group, LLC.

At the October 2017 Interstate Shellfish Sanitation Conference (ISSC) Biennial meeting, the MARBIONIC ELISA method for brevetoxin was approved for limited use in the National Shellfish Sanitation Program (NSSP) for hard clams, sunray venus clams, and oysters (pending FDA concurrence). The method is now used to monitor aquacultured shellfish in Florida. Samples with negative results (i.e. no toxins) can be harvested, while samples with positive results would require additional testing by the NSSP-approved, yet slower and more costly, Mouse Bioassay (MBA).

Several CRP-funded projects supported the ISSC’s final approval of the MARBIONC ELISA method for shellfish, including the Florida Sea Grant’s “Evaluation of Rapid Brevetoxin Tests for Use in Shellfish Regulation, the Shellfish Industry and Aquaculture” and the NCCOS PCMHAB project “Integration of Alternative Methods of Analysis into the Neurotoxic Shellfish Poisoning Monitoring and Management Framework.” Fifteen years elapsed between initiation of development and final approval for MARBIONC ELISA as the first non-mouse-based NSP testing method for use on shellfish within the U.S.

NCCOS scientists at the Beaufort, NC Laboratory worked together with the NOAA Northwest Fisheries Science Center and Mercury Science, Inc., to develop an ELISA test kit for domoic acid. The domoic acid ELISA test kit is commercially available; the Quileute Tribe and Quinault Nation in Washington State use it to safeguard their food supply and various environmental managers and public health officials in the United States, Canada, and France currently use the test kit. 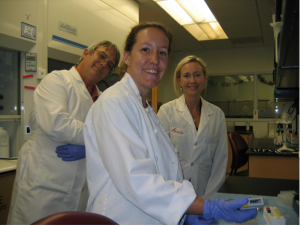 The Association of Official Analytical Chemists accepted the NCCOS RBA method for PSP/saxitoxin as an Official Method of Analysis in 2012 following a rigorous international inter-laboratory validation trial; the Interstate Shellfish Sanitation Conference (ISSC) approved the RBA for regulatory testing of paralytic shellfish toxins in mussels (and for limited use in clams and scallops) in 2014. This technique offers an alternative to the long-standing Mouse Bioassay (MBA) and the newer ELISA methods. A fluorescent signal RBA is under development to offer a potential alternative to the commonly used radioisotope signal version of the assay. NCCOS scientists train environmental personnel, such as those with the Food and Drug Administration, in RBA technique.

All NCCOS biotoxin screening technologies are part of a larger NCCOS effort to develop and transition innovative tools to prevent, control, or mitigate the occurrence of HABs and their impacts.

For more information on the Abraxis ELISA for neurotoxic and paralytic poisoning shellfish toxins, contact John.Ramsdell@noaa.gov.

For more information on the ELISA for domoic acid, contact Patricia.Tester@noaa.gov.