NCCOS sponsored research at the University of Delaware is testing the capability of a naturally occurring bacteriaShewanellato chemically control or mitigate harmful algal blooms (HABs). 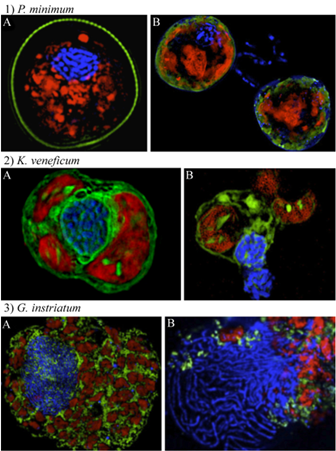 Bacteria are thought to regulate algal abundance in the environment, and several species of algicidal (algae-killing) bacteria were evaluated in laboratory experiments. However, few algicidal compounds produced by bacteria have been characterized. Only a limited number of studies have examined the mechanism by which these bacteria kill algae or the effect of algicidal bacteria on the natural microbial and plankton community.

The Mid-Atlantic coast of the U.S. is characterized by shallow coastal embayments subject to increasing eutrophication, creating an ideal environment for growth and proliferation of many algal species. Toxic algal species, including Karlodinium veneficum, Prorocentrum spp., Dinophysis acuminata, and Cochlodinium polykrikoidesare endemic to the Mid-Atlantic region and their blooms are common.

Under the leadership of Dr. Kathryn Coyne and associate Dr. Mark Warner at the University of Delaware, an NCCOS PCMHAB program funded project studied the bacteriaShewanella, the toxins it produces and the role it plays in the aquatic ecosystem. Results of this research arepromising because the bacteria products inhibited growth of some toxic algae but not other microorganisms. This has provided the motivation to move forward with the goal of eventually using the algicide for prevention or mitigation of HAB dinoflagellate blooms.

As quoted in the Wilmington, Delaware News Journal , Dr. Coyne stated, "It's like chemical warfare. If we can demonstrate that the algicide produced by the bacteria doesn't negatively impact other important species in the food chain, we may be able to use it to mitigate a harmful dinoflagellate bloom or avoidthem altogether by applying the algicide as a preventative measure.'

Beginning in 2015 Dr. Coyne andpartners were funded anew by NCCOS to continue their research into theShewanellaalgicide. The projectseeks to answer what concentration of the algicide is needed to produce the desired result without adversely affecting the environment orimportantspecies.