For over ten years NCCOS has developed and improved hypoxia (dead zone) forecasts similar to seasonal weather forecasts. The accuracy of these forecasts is proving to be quite good.Professor Don Scavia of the University of Michigan tracks the accuracy of the NCCOS-funded annual forecasts and finds the models work well in years without hurricanes or tropical storms, which disrupt dead zones prior to taking measurements. This model accuracy increases confidence when researchers use them for providing advice on nutrient load reductions, a major factor driving these model predictions. 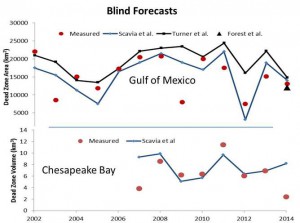 NCCOS sponsored dead zone ensemble model forecasts versus actual measurements from 2002 to 2014 for the Gulf of Mexico (top) and Chesapeake Bay (bottom). The models are particularly accuaratein years without hurricanes or tropical storms (e.g., 2009 and 2014). Credit: Don Scavia, University of Michigan.

Hypoxia forecasts are part of a larger NOAA effort to deliver ecological forecasts that support human health and well-being, coastal economies, and coastal and marine stewardship.