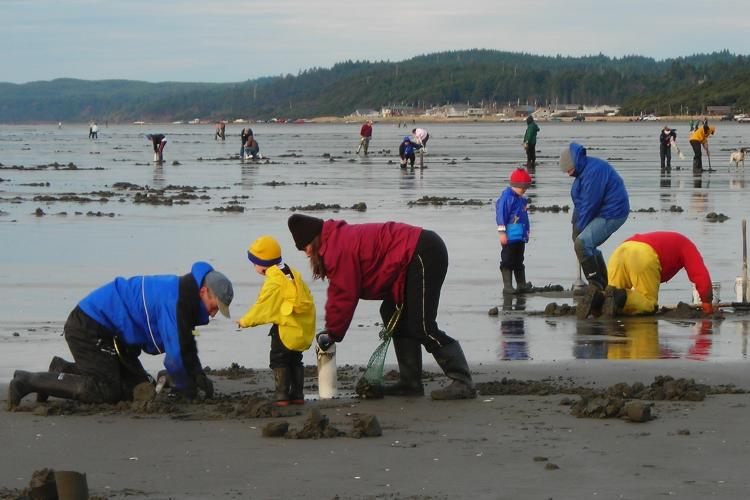 Repeated marine heatwaves off the U.S. West Coast starting about 2013 fueled record harmful algal blooms that seeded a region off Northern California and Southern Oregon with toxic algae, a new NCCOS-sponsored study has found. That reservoir of harmful algae has, in turn, spread across the West Coast and forced the closure of valuable Dungeness crab and other shellfish seasons every year since 2015. This year, toxic algae have closed Dungeness crab harvest and some clamming in Washington through December.

Offshore surveys and studies have unraveled the way toxic algae spreads through coastal waters. These data can help fisheries managers anticipate and mitigate the impacts. Scientists share that detailed information through regional bulletins that serve as an early warning system for harmful algal blooms.

That way, managers can focus closures in the most affected areas, for example, while others remain open. Or they can open fisheries earlier before the toxins build up in shellfish. The alert system has reduced the need for coastwide closures with widespread economic impacts.

NOAA Fisheries research surveys in 2015 first detected signs of a highly toxic “hot spot” of the toxic diatom Pseudo-nitzschia. It spread from the coast off Cape Mendocino in Northern California north to Cape Blanco in southern Oregon. That followed a record-setting marine heatwave that became known as “The Blob” and drove other ecological changes across the West Coast.

Wind-driven currents interact with underwater topography there, leading to the buildup of toxic cells. Pseudo-nitzchia cells can survive in marine sediment for several years. Subsequent surveys from 2016 to 2018 documented the algal hot spot again. Winds associated with storms spread the algae northward along the coast, where they collect in shellfish including clams, mussels, and Dungeness crab.

That shift has forced changes in, or closure of, some of the West Coast’s most valuable commercial and tribal fisheries every year since then.

Some studies have found that climate change may be increasing the odds of marine heatwaves around the world. However, scientists had not anticipated the development of algal hotspots like the one off the West Coast. That highlights the unexpected ecological fallout of climate change. Heatwaves or other climate events such as El Niño can, in turn, increase the odds and severity of harmful algal blooms.

The study was supported by an NCCOS Monitoring and Event Response for Harmful Algal Bloom (MERHAB) research project and helps demonstrate the value of HAB early warning and forecasting capabilities being developed by NOAA and its partners in U.S. coastal and Great Lakes regions.