A satellite view of the 2014 harmful algal bloom on Lake Erie, which the 2017 summer bloom is expected to be similar. Credit: NOAA

NOAA and its research partners predict that western Lake Erie will experience a significant harmful algal bloom this summer, potentially reaching levels last seen in 2013 and 2014, though smaller than the record bloom of 2015.This year's bloom is expected to measure 7.5 on the severity index, but could range between six and 9.5. An index above five indicates a potentially harmful bloom. The severity index is based on a bloom's biomass - the amount of its harmful algae - over a sustained period. The largest blooms, 2011 and 2015, were 10 and 10.5, respectively. 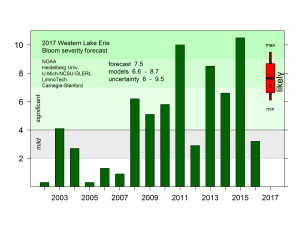 The 2017 severity forecast for Lake Erie's harmful algal bloom ranges from 6 to 9.5 (red bar). The green bars are the measured severity for past blooms. Credit: NOAA

Early season projections from NOAA and its partners predicted a larger than normal bloom. This is the final seasonal forecast. The Lake Erie forecast is part of a NOAA ecological forecasting initiative that aims to deliver accurate, relevant, timely and reliable ecological forecasts directly to coastal resource managers and the public.

In addition to the seasonal forecast, NOAA also issues bi-weekly forecasts during the bloom season. This year, NOAA will begin incorporating additional satellite data into its Lake Erie Harmful Algal Bloom Forecast System that will enhance accuracy and detail. The data come from Sentinel-3, a new satellite that measures coastal water color as part of the European Union's Copernicus program. NOAA's Lake Erie HAB forecast bulletins are available online and by subscription.