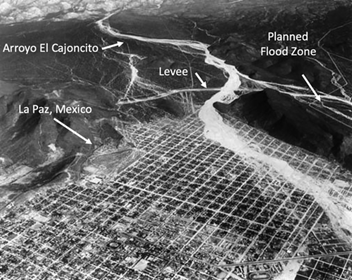 Aerial photo of La Paz, Mexico in October, 1976 after precipitation and runoff from Hurricane Liza caused the Arroyo El Cajoncito to tear through a protective levee, sending fast moving flood water, mud and debris through an urban development. This event epitomizes ultrahazardous flooding. (Photo by Harry Merrick, Printed in Sanders and Stanley, 2020).

New recommendations on how to engineer future stormwater infrastructure that reduces the risks of ultrahazardous flooding have been published in the journal WIREsWATER. The project was partially supported by NOAA NCCOS’s Ecological Effects of Sea Level Rise (EESLR) program and was completed by researchers at the University of California, Irvine and Virginia Tech. Ultrahazardous flooding occurs at low elevation at the foot of mountains, and is characterized by rapid onset, high velocity flooding with heavy loads of sediment and debris and unpredictable flood paths.

20th century civil engineers have addressed urban flooding primarily with hard infrastructure in the form of flood control channels, often lined with concrete for a smooth surface that quickly sweeps water downstream and away from developed areas. The engineered approaches have been effective for events smaller than the design capacity, but risks of disasters (from events larger than system capacity) are becoming more likely in a warming world. Traditional stormwater designs for ultrahazardous flooding have also contributed to a host of environmental and social problems with water quality, water availability, degraded habitats, high maintenance costs, unrealized amenities, and altered sediment movement from inland to the coast that affects patterns of coastal erosion. Much like “living shorelines” along the coast where natural processes are being integrated into more conventional shorelines stabilization techniques, there is a need for urban stormwater channels to embrace more natural processes and promote greater sustainability.

The article suggests “erodible corridors” are a possible solution that offer many of the qualities that hard structures ignore, plus reduce the risk of ultrahazardous flooding. This approach is a hybrid solution, as it uses some aspects of conventional engineering and incorporates natural processes.

Conceptualization of stormwater infrastructure for ultrahazardous flooding including (a) reservoirs at the base of mountains with controls on the storage/release of water, sediment and debris, (b) an erodible corridor with hardened banks and a soft core that provides environmental and social benefits in addition to flood control and (c) urban drainage systems with controls to promote water conservation, reuse and water quality. Corridor width will be site specific but will likely need to be at least 10 times the width of the standard flood control channel design (Recreated from Figure 6, Sanders and Stanley 2020)

The erodible corridor design involves a soft core bounded by hardened banks with enough space inside to allow for natural steam meandering and movement over time. This design would be difficult to install into existing cities without reclaiming space, but could be incorporated into cities that are expanding. This approach is in line with a design philosophy that protects the community with infrastructure that is “safe to fail” rather than “fail safe”, as conventional infrastructure is often not built to handle extreme events.