NCCOS has sponsored a study to determine the fair interest rate and return period for a new type of financial instrument called an Environmental Impact Bond. The study examines feasibility of using the new bond type to finance sediment erosion control in a small watershed at the U.S.-Mexican border. The hydro‐financial model can be viewed as a decision‐support tool that delivers information regarding costs, savings, risk premiums, and interest rates.

In watershed management, soil erosion, poor water quality, and degraded ecosystems pose significant challenges and costs. Oftentimes, the key issue is not a lack of understanding about what is needed to address these problems, but the inability to finance solutions effectively.

To overcome institutional and financial barriers, a promising new type of bond has emerged called an Environmental Impact Bond (EIB). EIBs are ‘green’ financial instruments where investors provide capital for watershed restoration projects, often viewed as risky. The bond principal is repaid with interest by watershed stakeholders who experience reductions in management costs (savings). However, determining a fair interest rate and realistic maturity date is a challenge.

The hydro‐financial modeling study was applied to a sediment management problem at the Los Laureles Canyon Watershed/Tijuana River-Estuary and the feasibility of using an EIB for several possible watershed intervention strategies.

Within the greater binational Tijuana River Watershed, the Los Laureles Canyon Watershed is a small watershed on the U.S.‐Mexico border with relatively high population density, steep slopes, terraced hillsides and significant sediment management challenges. Soil and gully erosion is magnified by vegetation loss and drainage over unpaved roads, affecting quality of life and flood hazards in Tijuana and ecosystems within the Tijuana River Valley especially on the U.S. side of the border. Excessive sedimentation buries salt marsh habitat and spreads pollutants and trash throughout the Tijuana River Estuary. Two sedimentation basins on the U.S. side help protect salt marsh and estuarine habitat from excessive sedimentation, trash, and debris including plastics. The basins are cleaned out on a yearly basis at considerable expense to the State of California of approximately $1.236 million per year. Costs can vary substantially from year to year based on the amount of sediment and debris which is linked to seasonal rainfall and disposal costs

Stabilization of hillslopes (e.g., with vegetation or other erosion control methods), armoring of channels, and paving of roadways are presently viewed as possible source control measures. However the border issue creates management and funding problems between the two nations hindering working together to solve the erosion problem. An EIB would allow downstream stakeholders (i.e., U.S.) to address the upstream erosion issues without having to make direct investments within Mexico itself and use yearly cost savings to pay back the principal of the bond.

In the Tijuana River/Estuary study, modeling results showed that increasing the repayment period (duration) of an EIB from 5 to 10 years is an effective means of improving its feasibility for success. Not only do greater savings accrue over time to pay back bond principal, but the bond is less likely to be affected by the possibility of bond duration overlapping with a wet year (or years), hence increased erosion, that would reduce savings compared to the average year. The study considers various strategies for reducing the risk premiums paid to investors.

This study was part of the NCCOS Effects of Seal Level Rise (ESLR) project Codevelopment of Modeling Tools to Manage Sediment for Sustainable and Resilient Coastal Lowland Habitat in Southern California. 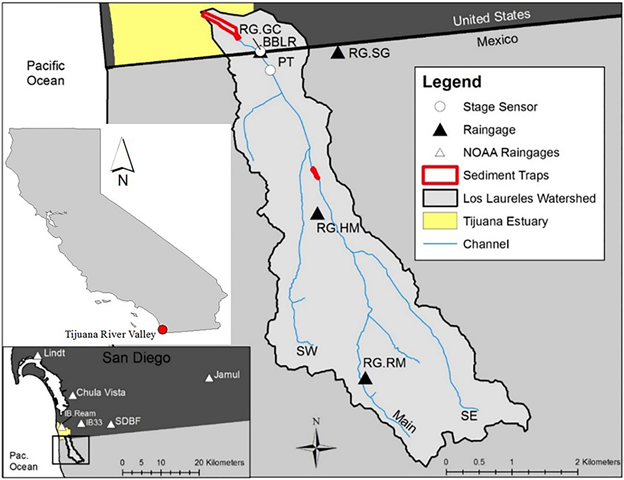