Climatic changes in Arctic Alaska are resulting in more harmful algal blooms (HABs) for the region, signaling a potential growing threat to human and ecosystem health. Over the last decade, several research groups have discovered large accumulations of the resting stages of HAB species on or near the seafloor, laying dormant in unfavorably cool Arctic waters. The dormant cysts are a ticking time bomb set to go off as waters warm, creating favorable conditions for large toxic algal blooms to form. 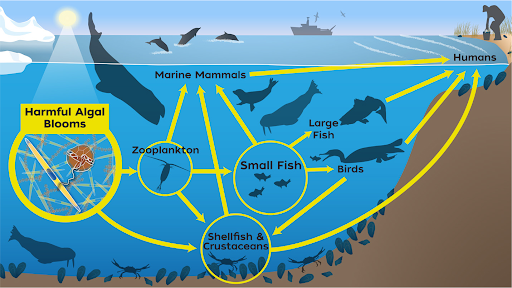 Toxins produced by harmful algal blooms (HABs) can be accumulated and transferred throughout the food web when algal cells are eaten by zooplankton, fish, and shellfish that are, in turn, consumed by other animals and humans. At sufficiently high levels, these toxins can sicken or kill both humans and wildlife. Illustration created by Natalie Renier, WHOI Graphic Services.

A new NCCOS-funded study discusses the challenges of monitoring and managing two toxins associated with the blooms — saxitoxins, produced by Alexandrium catenella, and domoic acid, produced by multiple species in the diatom genus Pseudo-nitzschia.

Algal blooms, and the toxins they produce, immediately threaten an array of marine life and the coastal communities who rely on fish and shellfish resources. Increased exposure to HAB toxins may also have long-term, cascading effects for the region.

Recent advancements in technology may provide critical monitoring tools for the region. New sensors, capable of detecting and quantifying HAB cells and toxins in situ, allow data to be both collected and transmitted continuously from remote locations to shore-based scientists and managers. These advancements are expected to improve knowledge and management of HABs in the region, ultimately leading toward a healthier coastal community and ecosystem.