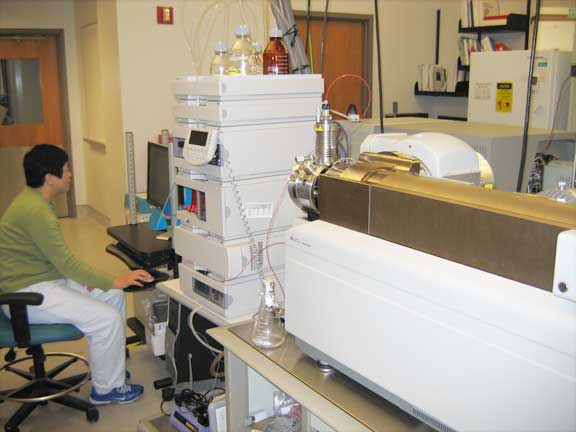 SPR chips are about the size of a dime.

An autonomous underwater vehicle (AUV)-based HAB sensor currently under development is being targeted for integration within the rapidly emerging IOOS infrastructure. This sensor will provide data to forecasting models, enabling more accurate prediction of HABs and mitigation of their effects on humans, wildlife, and ecosystems.

AUV-based detection of blooms using sophisticated yet inexpensive SPR sensors reduces costs associated with scientists directly monitoring water color and performing cell counts, while increasing the speed and efficiency of detection. In-water sensors deployed on the AUV can also bridge gaps in satellite ocean color data due to cloud cover. Coupled with satellite imagery, data generated by the AUV-mounted ESP can provide a unique 3D picture of bloom development and movement within the water column over time. This capability will yield unprecedented views of HAB dynamics and the diverse biological, chemical, and physical factors that influence the growth and toxicity of these microscopic, yet potentially harmful, plants in the ocean.

The capability for remote, near-real time detection of organisms causing HABs and the toxins they produce is essential for coastal managers to monitor and predict the abundance and toxicity of HAB species prior to and during bloom events. The AUV-based HAB sensor is being developed through a partnership between NOAA, Monterey Bay Aquarium Research Institute, and Universities of Maine and Washington. This effort is funded by the National Science Foundation under the Oceanographic Technology and Interdisciplinary Coordination Program.