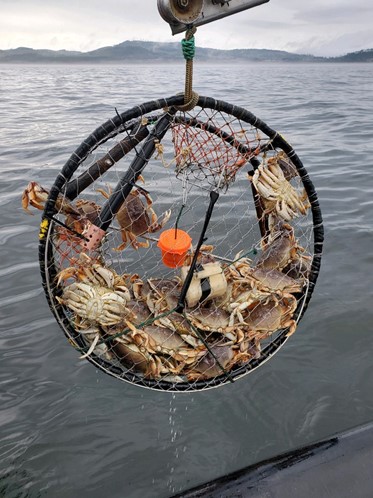 A newly published article in Sea Technology highlights the power of collaborative research between scientists and fishermen to detect and track the onset of seasonal hypoxia.

The NCCOS-supported project has developed low-cost, self-reporting dissolved oxygen sensors that are being deployed by commercial crab fishermen on their pots off the Oregon coast. The Dungeness crab fishery has been impacted by the recurrence of low-oxygen events that are hard to track or predict. Waters that hold high oxygen values one day may experience hypoxia (low oxygen) the next. Crab pots placed in one location may have crabs that have completely succumbed to hypoxia (i.e., died), while pots recovered kilometers away may be unaffected. This variability also poses challenges for managers and scientists. They rely on only a handful, and at times single research mooring to detect hypoxic events in productive state waters.

Now, fishermen are partners in collecting crucial data on ocean oxygen changes. In just one season, the collaboration between fishermen and researchers from Oregon State University has increased by an order of magnitude the number of hypoxia monitoring sites along the Oregon Coast. As one fisherman noted, he is “fishing for hypoxia.”

This project is part of the NCCOS Coastal Hypoxia Research Program (CHRP) and led by Oregon State University.