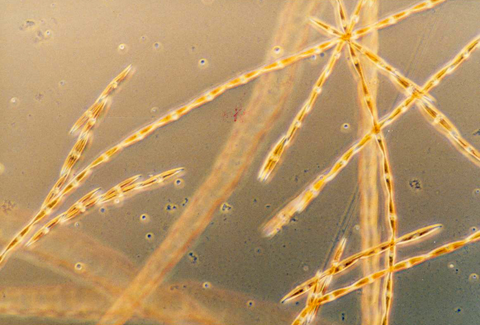 Pseudo-nitzschia, a marine alga that can cause domoic acid poisoning. Credit: NOAA.

An NCCOS-funded study found that starvation was the likely cause of the large number of Common Murre deaths observed on central and northern California beaches in 2015. The researchers concluded that an extensive, concurrent algal bloom of Pseudo-nitzschia, which can produce the neurotoxin domoic acid, played a secondary detrimental role.

Domoic acid poisoning is known to cause neurological problems, gastroenteritis, and in some cases, death in seabirds, although specific lethal limits for seabirds are still unknown. Domoic acid from the unprecedented Pseudo-nitzschia bloom of 2015 remained in California's coastal waters for a year and led to fish kills and massive closures of fisheries, including that of the northern anchovy—a primary prey item of the Common Murre.

Beach survey programs reported an increase in dead and debilitated Common Murres on central and northern California beaches from August through December 2015. The researchers collected over 1,000 Common Murres, and conducted necropsies on a subset of these to determine probable cause of death. The team analyzed 29 birds for biotoxins and found detectable levels of domoic acid in 24. The U.S. Geological Survey tested bird samples for infectious diseases and found none.

Although most of the birds sampled had domoic acid present, the emaciated state of many of the samples and the other birds collected led the researchers to conclude that starvation was the likely cause of death.