NCCOS-sponsored research assessed the effectiveness of beach and dune nourishment on the morphological resilience of Dauphin Island, Alabama, for a 30-year period of beach management. Overall, the researchers found that adding sand can help maintain the barrier island's geometry and volume over decadal timescales.

Beach nourishment is a common method for rebuilding and maintaining beaches and dunes experiencing erosion from storms and sea level rise. However, the impacts of nourishment are mostly understood in relatively short-term time frames (i.e., less than 10 years). Given limited budgets for coastal protection, beach nourishment planners must consider how sand moves once it is placed and how added sand will protect the beach nourishment site and surrounding region in the long term. 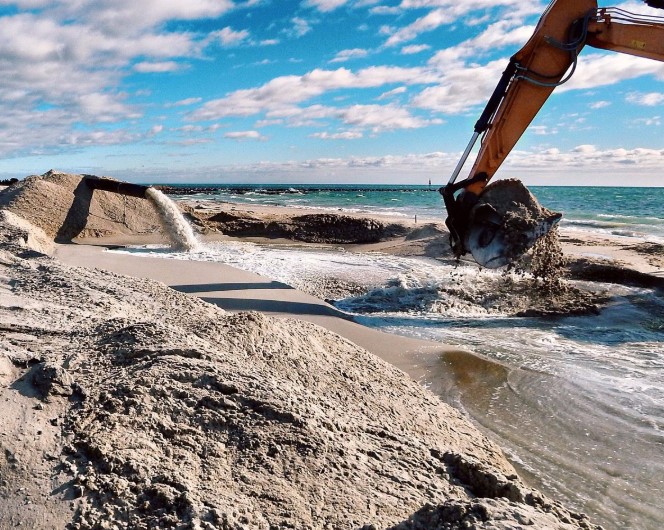 The study includes a review of natural barrier island sediment processes. For example during storms, as water levels approach and exceed dunes, sand is transported either through collision (erosion of the dune face with sand deposited offshore) or overwash (overtopping of the dune crest with sand transported landward and deposited on the back barrier). If water levels on both sides of the island exceed the dune crest, breaching may occur, forming an inlet.

Over decadal timescales, barrier islands depend on the accumulation of overwash deposition during individual storm events to migrate landward (rollover) or seaward in response to changes in sea level. Although storms may overwash and destroy natural dune systems, over time, dunes can maintain volume due to natural recovery processes. If a barrier island is unable to keep pace, it may drown by flattening if the island is unable to maintain height, narrowing if the island undergoes rapid shoreline retreat, or deflating (a combination of narrowing and flattening). 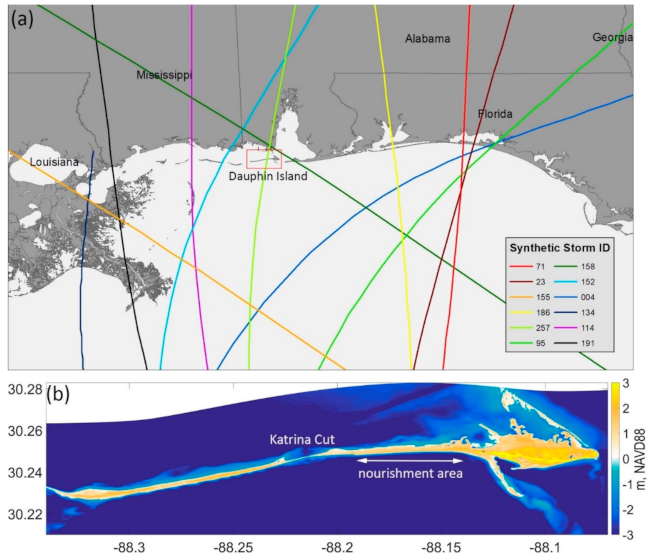 (a) Study area with synthetic storm tracks for a 30-year realization and (b) initial (Year 0) XBeach model bed level elevations (in meters, relative to NAVD88) at Dauphin Island. Base map layer in (a) provided by ESRI. Credit: Passeri et al., 2021.

The study centered on Dauphin Island, a low-lying barrier island located off the coast of Alabama. The island has been severely impacted by extreme storm events including Hurricane Ivan (2004), which caused extensive overwash, and Hurricane Katrina (2005), which breached the middle of the island. The eastern section of the island is developed with homes and infrastructure, has well developed dunes, and has undergone frequent nourishment after storm events. The western section is undeveloped and lower in elevation with smaller dunes. Historically, nourishment activities have not occurred there. Due to its low elevation, future hazards such as sea level rise and storms may increase inundation, overwash, and loss of land on Dauphin Island.

Results showed the 30-year nourishment modeling scenario helped maintain island volumes by increasing barrier height and width compared with the no-nourishment scenario. During storms when collision was dominant, higher volumes of sand were lost from the wider beach in the nourishment scenario than in the no-action scenario. During stronger storms, nourishment reduced dune overtopping, allowing the island to maintain height and width, whereas the no-action scenario resulted in island rollover (moving the island landward) and decreased island height. Nourishment was particularly effective in reducing erosion and breaching during back-to-back storms occurring in the same year.

Study results provide insight into how beach and dune nourishment can improve morphological resilience by maintaining barrier island geometry and volume over decadal timescales. The study was led by scientists from the U.S. Geological Survey, University of Georgia, Louisiana State University, The Water Institute of the Gulf, and the U.S. Army Corps of Engineers. Support was provided, in part, by the NCCOS Effects of Sea Level Rise project Dynamic Sea Level Rise Assessments of the Ability of Natural and Nature-Based Features to Mitigate Surge and Nuisance Flooding. 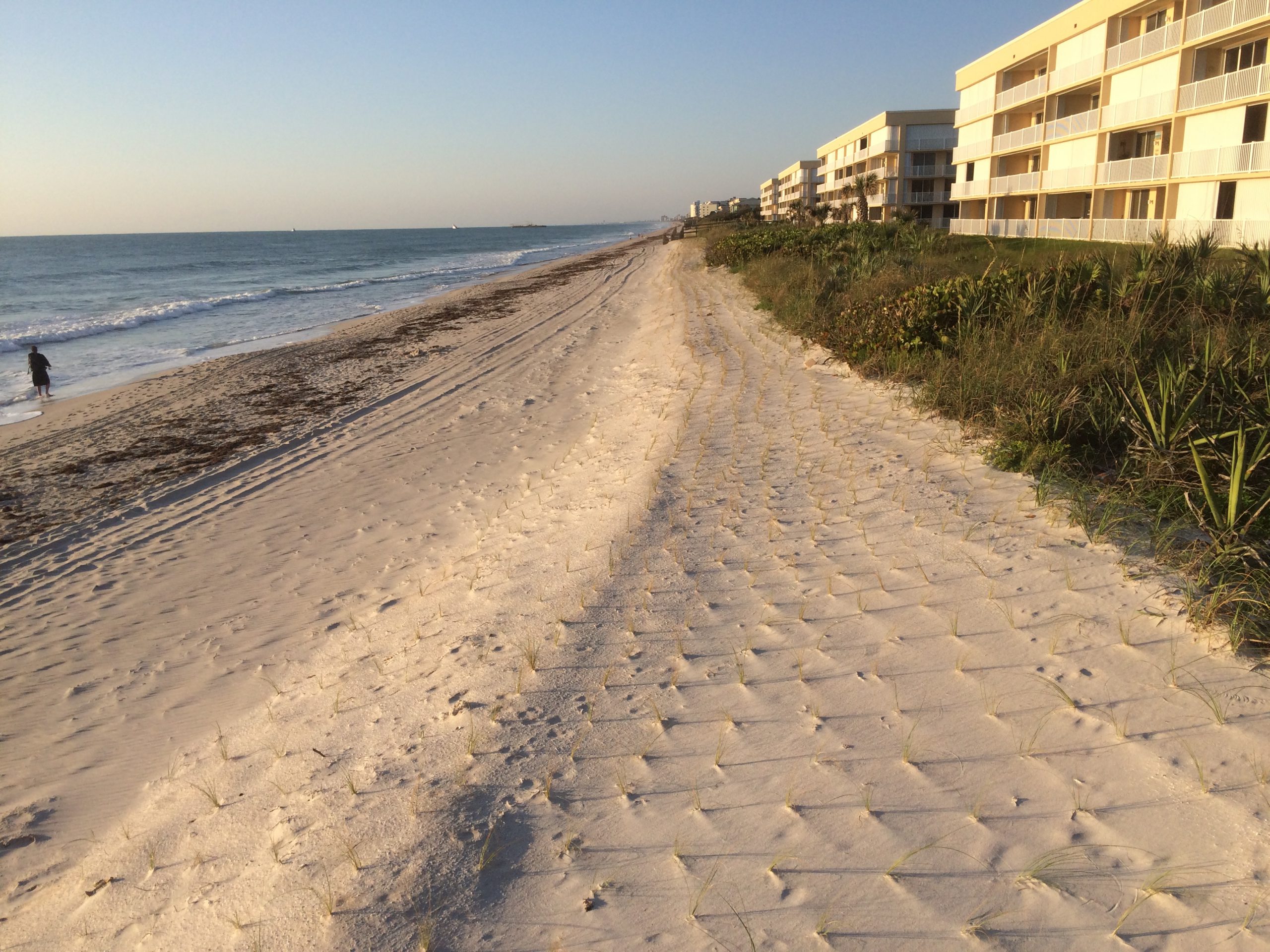 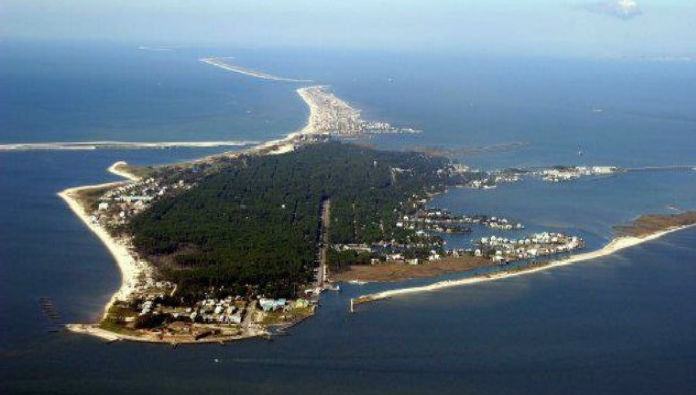