A NOAA funded study led by the University of Florida and Florida Gulf Coast University has recently published two new research papers and a community planning tool called ACUNE (Adaptation of Coastal Urban and Natural Ecosystems) that is advancing decision makers’ understanding of what coastal flooding may look like in Southwest Florida (SWFL) now and in the future. 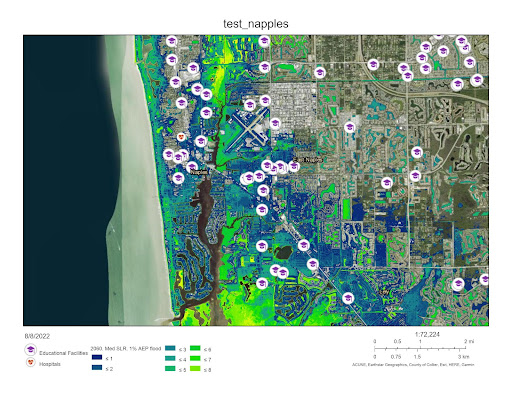 Figure 1: Snapshot of the ACUNE viewer output for Naples, FL showing predicted flooding extent and depth (in feet) of a 100-year flood in 2060 under medium projected sea level rise. Users can choose what assets to highlight on the map. Educational facilities and hospitals are shown here.

While this science was initially funded by federal entities, local city and county funds have continued to support the addition of map layers that are informative for their planning. City Managers in the City of Naples and Collier County officials are using ACUNE to assess areas vulnerable to flooding and to coordinate infrastructure improvements. The City of Everglades is using ACUNE in their Comprehensive Plan to increase flood resilience and form an adaptation plan. Further, ACUNE is being expanded with funding from the Resilient Florida Program of the Florida Department of Environmental Protection from Collier County to include nearby Lee and Charlotte counties to assist the SWFL Regional Resiliency Coalition.

The ACUNE tool has already been applied by archaeologists to identify historic sites that will be threatened by saltwater inundation, while the Naples Botanical Garden strategized on locations from which seeds would need to be collected and stored (see here).

The two new articles focus on compound flood risks (e.g. flooding from both precipitation and coastal water). The first paper found that the combined extent and timing of coastal inundation is sensitive to sea levels, greenhouse gas emissions, and tropical cyclone and storm patterns. The second paper makes predictions for 2100 on the joint probabilities of landfalling cyclones and sea level rise to offer a longer term perspective of what can be expected for flood risk. These science outputs will be included in the data viewer (ACUNE) to offer the first opportunity for coastal communities to consider multiple sources of flooding in one risk assessment.

This study was supported in part by the NCCOS Effects of Sea Level Rise (ESLR) project “How Natural and Nature-based Features Could Enhance Coastal Resilience of Urban and Natural Ecosystems in Southwest Florida” and the RESTORE Science Program.