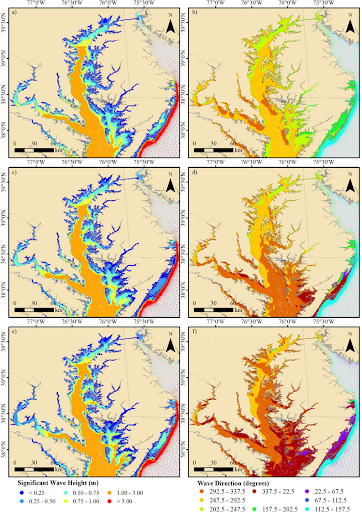 Figure 1: Examples of pre-processed files that are input into the ArcWaT toolbox to determine the impact of different wave processes. Shown here are significant wave heights (left panel) and their respective incoming directions (right panel) at three different times for the simulation of Hurricane Irene in Chesapeake Bay, MD (Source: Figure 6 in Cassalho et al., 2022).

In a new research paper in the journal Geocarto International, the research team outlines the ArcGIS Wave Transformation (ArcWaT) toolbox and compares it to other wave transformation viewers (e.g.,WATTE). ArcWat is more complex than other wave transformation toolboxes and users need to have direct access to model outputs, which may not be as widely accessible outside the coastal modeling community. However, ArcWaT is accessible to those with general ArcGIS capacity and does not need to have a modeling background. ArcWaT also captures more wave processes than other tools and is better at estimating waves when wave direction is not perfectly perpendicular to shore. Results show that ArcWaT more easily identifies several wave transformation processes including:

ArcWaT is composed of two main toolboxes for the: i) processing of model outputs, and ii) estimation of relative wave transformation percentages, both for time-dependent and maximum wave conditions. A novel algorithm converting wave magnitude and direction output (from numerical models) into relative wave change was also developed within the ArcWaT framework. The functionalities of ArcWaT were explored during Hurricane Irene for the Chesapeake Bay.

This study was supported in part by the NCCOS Effects of Sea Level Rise (ESLR) project: “Quantifying the Benefits of Natural and Nature-based Features in Maryland’s Chesapeake Bay Under Different Sea Level Rise Scenarios to Inform Conservation and Management Decisions." The research team is analyzing how marshes, submerged aquatic vegetation, and other natural features reduce wave energy and flood risks along Maryland’s Chesapeake Bay and Atlantic coastal bays. The findings will inform management actions by the Maryland Department of Natural Resources to maintain or enhance the ecosystem services of marshes and other natural features and inform efforts by The Nature Conservancy to promote the consideration of natural features in county and municipal adaptation plans.

The tool and supporting documentation can be found here.