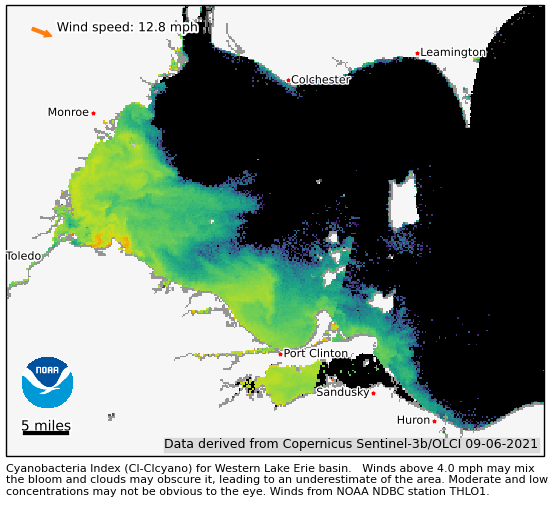 Peak Microcystis cyanobacteria bloom biomass in western Lake Erie (Aug 30-Sep 08, 2021). The images used data derived from the Copernicus Sentinel-3 mission provided by EUMETSAT. Blue indicates low concentrations that would not be immediately obvious to the eye. Areas that are red had greater likelihood for scum formation.

October marked the end of the summer harmful algal bloom (HAB) season on Lake Erie. The 2021 Microcystis bloom had a final severity index (SI) of 6.0, much higher than in 2020 when the severity was 3.0. The forecasted bloom severity was between 2.0 and 4.5, an underestimate of the measured SI of 6.0.

This seasonal forecast uses an ensemble of different models, which consider phosphorus loading into the lake during the spring and early summer. The large bioavailable phosphorus load in July 2021, the third highest since 2008, may have led to the larger than forecasted bloom. Previous years (2015 and 2017) with large July loads also had wet springs, leading to a large input of phosphorus in the spring, reducing the relative influence of the July load. In contrast, 2021 had a drier spring than average, suggesting the relative importance of July loads on the bloom. NOAA scientists will examine the differences between observed and predicted bloom severity in comparison with forecasts for previous years to evaluate the models.

The 2021 bloom was slow to develop starting in late July, and reached a peak from late August to early September, mostly in U.S. waters. At its peak, the bloom covered 530 square miles. The bloom weakened in mid-September, following several days of strong winds. Following a period of calm winds and seasonally warm waters, the bloom re-intensified near the Michigan coast at the end of September. The bloom lasted longer than recent years, likely due to warm water temperatures, before slowly dissipating through October.