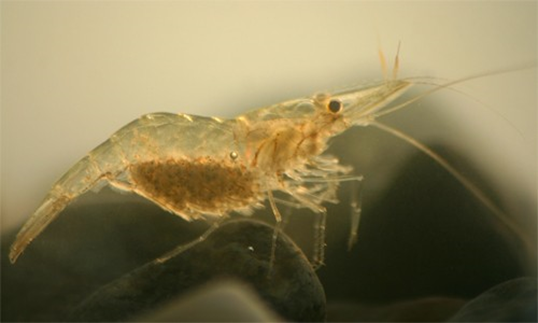 Research Area(s): Coastal Change / Vulnerability and Risk Assessment; Stressor Impacts and Mitigation / Biological Effects of Contaminants and Nutrients
Region(s) of Study: Waterbodies / Atlantic Ocean, Gulf of Mexico
Primary Contact(s): marie.delorenzo@noaa.gov; mike.fulton@noaa.gov
This project began in 2017 and will be completed in 2019

One of the lingering questions after the Deepwater Horizon oil spill concerns the toxicity of thin oil sheens to aquatic species, and whether toxicity may be magnified by interaction of hydrocarbon compounds with ultraviolet (UV)  light. Early life stages, which are often translucent, congregate at the water surface, making them prone to UV light and physical interaction with oil sheens. We are examining the interactive effects of UV light and oil exposure to early life stages of fish and crustaceans.

According to the EPA, approximately 20,000 oil spills are reported per year in the U.S. This research addresses NOAA’s goal of understanding ecosystem responses to stress in order to inform response and restoration decisions. Organisms can be exposed to oil via oil that is dissolved in the water column, thin sheens of oil, oiled sediments, and through their diet. Estuaries are dynamic areas where chemical exposures are combined with extremes in salinity, temperature, dissolved oxygen, pH and light. Many early life stages of estuarine organisms may be exposed to ultraviolet (UV) light and oil.

What We Did/Are Doing 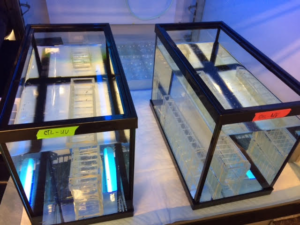 We are focusing on early life stages of estuarine organisms including the grass shrimp, Palaemonetes pugio, the sheepshead minnow, Cyprinodon variegatus, the red drum, Scianops ocellauts, the mud snail, Ilyanassa obsoleta, and the sea urchin Lytechinus variegatus.  To evaluate the extent and mechanisms of UV-enhanced toxicity, we are testing both water-accommodated fractions of Louisiana Sweet Crude (LSC) oil and thin sheens. Potential pathways for interaction between UV light and the chemical constituents of oil are being investigated, including direct physical interaction of the organisms with the thin oil sheen on the water surface, photomodification of the chemical constituents of oil into more toxic forms, and photoactivation of chemical constituents of the oil within the organism to more toxic forms. Effects on survival are being assessed, as well as subsequent growth and developmental effects after short-term sublethal exposures. Chemical profiles of LSC oil preparations with and without UV exposure will be characterized.

Our results thus far indicate that UV light significantly increases the toxicity of dissolved oil and thin sheens of oil. We are also observing latent effects on shrimp growth and development after short-term oil and UV exposure.

We plan to continue to study effects of acute oil sheen exposure to larvae on adult reproduction (next generational studies) with shrimp and fish. We will examine physiological endpoints such as cellular enzyme activity and gene expression in response to oil and UV exposure. We will perform chemical analyses to determine photo oxidative products and measure biouptake of oil.

This project addresses priority research needs identified by NOAA’s Office of Response and Restoration. The intended outcomes of this project will be research products that answer key scientific questions and increase the ability to respond to oil spills. Specifically, we will provide data (toxicity thresholds to be used in chemical databases, bioeffects characterizations, and chemical fate analyses), consultation services (data extrapolation and application to field response), and research synthesis (publications and presentations).