This project is developing modeling tools to improve short term and seasonal predictions of toxic red tide Karenia brevis blooms in the Gulf of Mexico West Florida Shelf. The project provides (1) a transferable tool for seasonal prediction to be used by management agencies and (2) further refines the short-term prediction tool (3.5 days) already developed and in daily operational use. This work allows management agencies to better predict and mitigate the negative effects of red tide blooms. 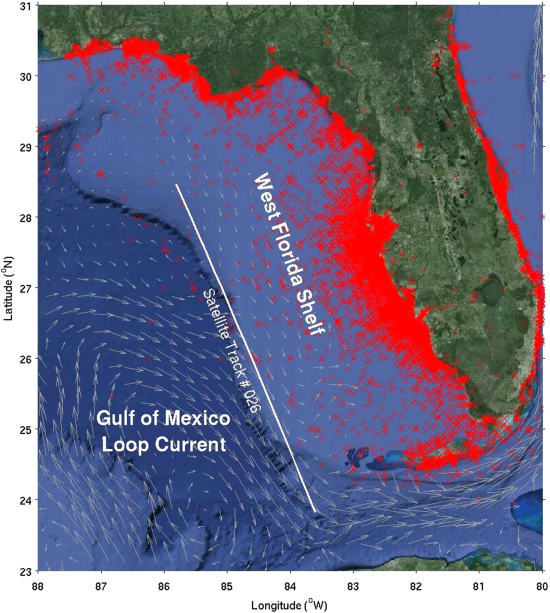 Observations of red tide (Karenia brevis) in the eastern Gulf of Mexico from 1953 to 2014. Credit: R. Weisberg, University of South Florida.

Why We Care
Blooms of Karenia brevis originate offshore in relatively nutrient and silicate-poor waters of the West Florida (continental) Shelf (WFS) before traveling to the Florida coastline by currents and upwelling. Although scientists describe the WFS waters as “oligotrophic’ (having low levels of nutrients), the area supports productive coastal industries, including reef fisheries and tourism. Blooms of K. brevis, fueled by nutrients of varying origins, annually threaten these industries. While land-derived nutrients may account for near shore productivity, they do not explain the inter-annual variability in blooms.

In the in (relatively) nutrient poor (termed oligotrophic) offshore waters of the Gulf of Mexico, scientists believe that the K. brevis c ells utilize nutrients from nitrogen fixing single-cell Trichodesmium cyanobacteria. Being light sensitive, K. brevis cells also receive necessary shading from the overlying Trichodesmium. Once the bloom reaches sufficient concentration to dominate the phytoplankton community, the then mono-specific bloom utilizes all available nutrient sources as well as generating its own nutrient supply using its toxins to kill fish. According to this hypothesis, K. brevis blooms observed at the coast are mature blooms that developed in relatively nutrient poor offshore waters where silicate levels were too low for diatoms to compete with K. brevis.

Upwelling is a necessary condition for K. brevis HABs along the west Florida coastline and elsewhere, but too much upwelling may obviate such occurrences. Transport of blooms to the coast occurs via upwelling circulation generated from southward flowing winds (wind-driven) and the southward-flowing portion of the Loop Current (Loop Current–driven). Once in shallow water, relatively high concentrations of colored dissolved organic matter can shade blooms. Persistent and intense upwelling of new inorganic (excess) nutrients across the shelf slope favors diatoms over dinoflagellates  (e.g., K. brevis) and suppresses HAB development. In other words, both the organism’s biology and the ocean’s circulation physics are necessary conditions for a K. brevis bloom, but neither alone are sufficient. These characteristics make it difficult predict blooms and tend to make each bloom somewhat different.

What We Are Doing
The goal of this project is to formalize HAB predictions into more quantitative measures for transition and application within an operational forecasting framework. The project is refining and providing a transferable tool (model) for seasonal prediction for use by management agencies and for the benefit of the broader scientific and public community.

The project scientists seek to understand the role of physical, chemical, and biological variables in the development and progression of K. brevis blooms and develop capabilities for both intermediate (seasonal) and short-term (several days) predictions in the eastern Gulf of Mexico. The approach combines in situ (field) observations (cell counts, biochemical and circulation data) with satellite remotely sensed data (altimetry, color and temperature) and numerical model simulations (circulation and biochemical). Adding biochemistry and species interactions further refines the short-term (3.5 days) prediction tool already developed and in daily automated use in collaboration with Florida Fish & Wildlife Conservation Commission (FWC).

The research hypothesis is that upwelling is a necessary condition for K. brevis to become a HAB along the coast, but too much upwelling leads instead to a diatom bloom. This conceptual model was employed successfully to explain why there was no K. brevis bloom in 2010 and then to predict several months in advance that a major bloom would not occur 2013, but then would occur in 2014 and in other coastal regions.

The project is led by Dr. William Weisberg (University of South Florida College of Marine Science) and Dr. Alina Corcoran (FWC Fish & Wildlife Research Institute) and is funded through the NCCOS Prevention, Control, and Mitigation of Harmful Algal Blooms Program (PCMHAB). The project is under the guidance of a four-member Technical Advisory Committee (TAC) to ensure that project work remains germane to the program goals and that appropriate transitions will occur as planned.

Next Steps
Possible incorporation of project model into GCOOS and other Gulf of Mexico observing systems. Sharing and communicating results with other developing and operational HAB forecast systems around the U.S. (e.g., Gulf of Maine, Pacific Northwest, and California coast).

In April 2020, a publication from this project was honored by the John Wiley & Sons Journal of Geophysical Research: Oceans for being one of the top downloaded in recent journal history. Among work published between January 2018 and December 2019, it received some of the most downloads in the 12 months following online publication.