NOAA Mussel Watch Program: An Assessment of Contaminants of Emerging Concern in the Gulf of Maine

Why We Care
The Gulf of Maine supports a variety of commercial fisheries and has thriving tourism and hospitality industries. These activities are linked to the region's growing coastal population. As population grows, so does the risk of adding anthropogenic contaminants to aquatic environments through wastewater and effluent discharges, septic system releases, and storm water runoff.

Previous studies in the region have investigated legacy contaminants, such as trace elements (“heavy metals”) and persistent organic pollutants (e.g., polychlorinated biphenyls (PCBs), organochlorine pesticides, chlordane, and polycyclic aromatic hydrocarbons (PAHs)). These research and monitoring efforts have helped managers limit the impact that legacy contaminants have on coastal ecosystems, but such efforts are lacking for the increasing number of new and unregulated compounds known as contaminants of emerging concern (CECs), many of which are known to be harmful to people, animals, and the environment.

NOAA's Mussel Watch Program has been assessing a suite of CECs in diverse, coastal regions for potential inclusion in long-term monitoring. Building on these pilot studies, results from this project will fill CEC data gaps in the region and support the Gulf of Maine Council on the Marine Environment's (GOMC) Gulfwatch Program mission to accurately characterize the condition of the Gulf of Maine ecosystem to enhance marine resource management and protect public health.

What We Did
In collaboration with the GOMC Gulfwatch Program, NOAA's Mussel Watch Program conducted an assessment of the presence, distribution, and concentrations of contaminants of emerging concern in blue mussels (Mytilus edulis) from Gulf of Maine coastal waters. Like the national Mussel Watch Program, the Gulfwatch monitoring program uses a sentinel-based monitoring approach, collecting and analyzing bivalves as surrogates for coastal water pollution. 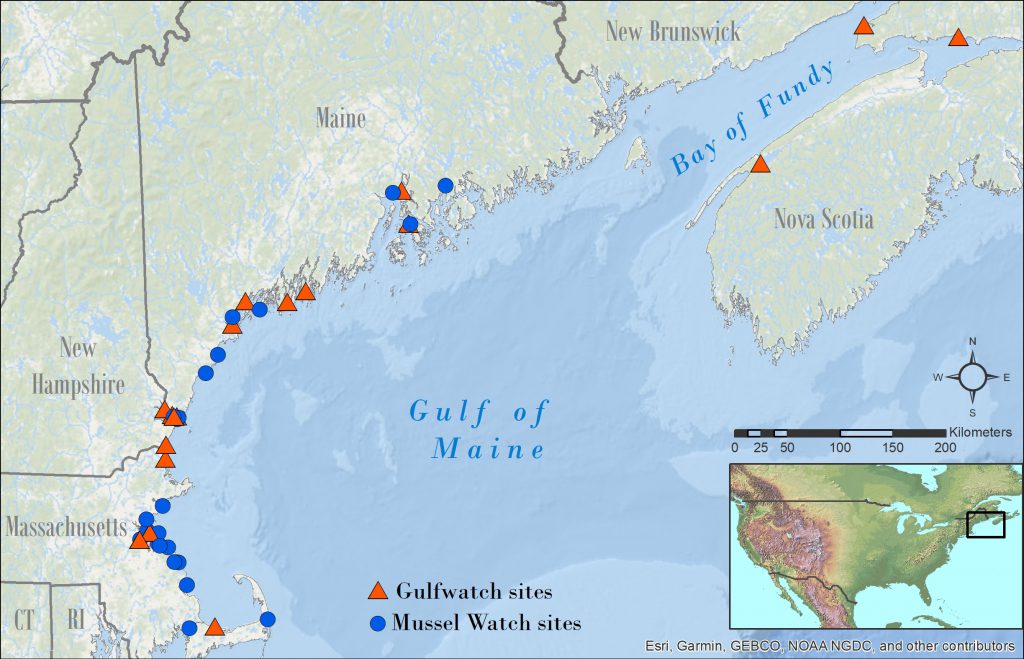 What We Found
Project results showed that contaminants of emerging concern are present and accumulating in coastal bivalves in the Gulf of Maine. The detection of at least two CEC compounds at every monitoring location highlighted the presence of these contaminants throughout the four Gulf of Maine jurisdictions studied in this report. The distribution and magnitude of CECs also depended on location and land-use types in watersheds adjacent to monitoring locations. Based on the land-use assessment in this study, CECs were located in coastal zones within all land-use categories. However, some contaminants, such as APs, PPCPs, and PBDEs, were positively correlated with percent impervious surface or the developed land-use category. Furthermore, many of the highest detection frequencies were located in developed areas, including Boston, MA, Portsmouth, NH, and Portland, ME. Wastewater treatment plants and outfalls may also be influencing the presence and concentration of some compounds. The researchers did not detect current-use pesticides or polybrominated biphenyls in any of the samples.