Why We Care
In 2015–2017, scientists from NOAA's National Centers for Coastal Ocean Science (NCCOS) investigated the distribution and magnitude of contaminants of emerging concern (CECs) in the Chesapeake Bay and Charleston Harbor, South Carolina. CECs are unregulated, not commonly monitored, but potentially toxic chemicals that are finding their way into the environment. These chemicals include pharmaceuticals and personal care products (PPCPs), such as prescription and illegal drugs, sunscreens, and growth hormones for animals. Because pharmaceuticals are developed to have biological effects, their presence in the environment may affect other organisms. Other CECs include persistent pollutants, such as flame retardants, contemporary pesticides, and industrial by-products; and stain-resistant compounds, such as perfluorinated and phenolic compounds (PFCs).

While CECs can benefit society, as is the case with life-saving flame retardants, over time they can leak into the environment, and have impacts that are not well understood. Flame retardants, for example, are persistent and bioaccumulative, and are suspected to harm the thyroid and nervous systems of animals. Other CECs have been found to act as endocrine-disrupting chemicals capable of modulating normal hormonal functions and steroidal synthesis.

In response to public concerns about the widespread distribution and potential impacts of these unregulated contaminants, NCCOS's national Mussel Watch Program is investigating the prevalence and magnitude of CEC chemicals in U.S. coastal areas through a series of pilot studies.

What We Did
The NCCOS Mussel Watch Program uses an ecosystem-based approach to monitoring, which entails measuring the concentration of contaminants in sediment and tissue of indigenous organisms, such as oysters, as a way to evaluate local environmental quality.

In the Chesapeake Bay, scientists from NCCOS’s Oxford Laboratory in Oxford, Maryland, and the Maryland Department of Natural Resources identified suitable survey areas, including tributaries of the Patapsco, Severn, Rhode, and Choptank Rivers. Land use in these watersheds included heavy urbanization, moderate urbanization, mixed-use (forested and moderate urbanization), and agriculture, respectively. If wild oysters were not present at a survey site, the researchers deployed caged oysters. Partners, including volunteers and a network of citizen groups such as Marylanders Grow Oysters and River Keepers, assisted with cage deployment and maintenance. In addition to the caged oysters, the research team collected sediment and wild oysters from five of the 14 historic Mussel Watch monitoring sites in the Chesapeake Bay.

Deployment of caged oysters at a survey site in the Chesapeake Bay. Credit: NOAA. 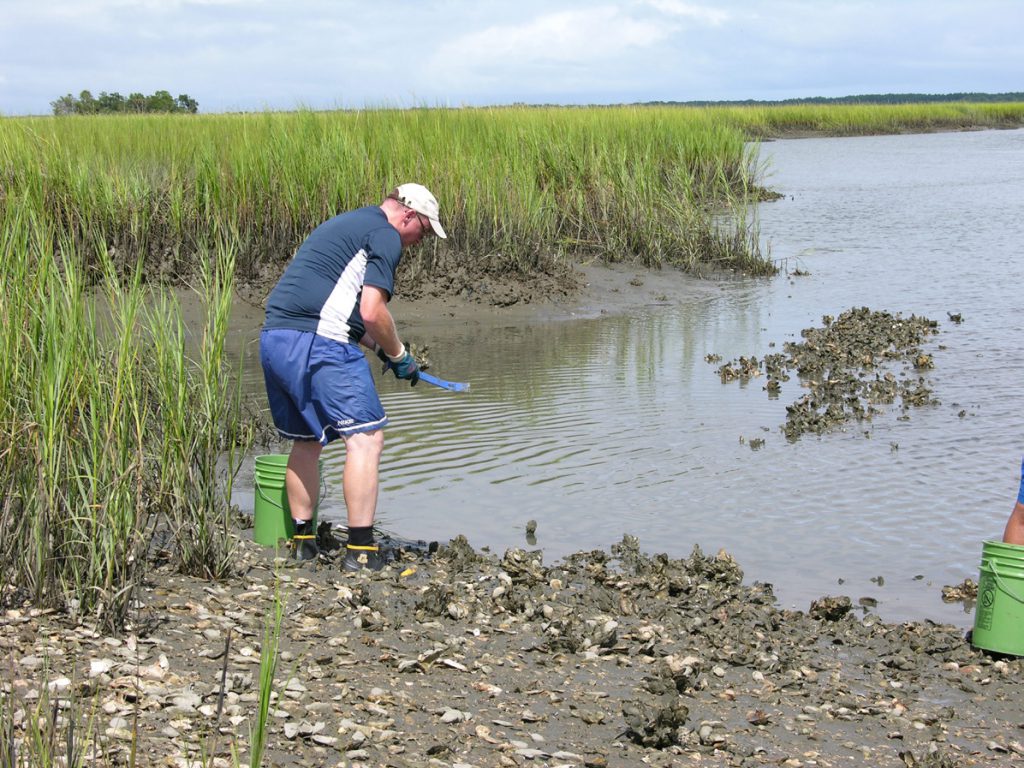 What We Found
Of the 216 CECs tested, we detected 98 of them in our oyster tissue and surface sediment samples. PPCPs detected included pain killers, antidepressants, antibiotics, and caffeine. Maryland oyster tissues had the highest concentrations of PPCPs, primarily the pharmaceuticals prednisone, hydrocortisone, and acetaminophen.

In both Maryland and South Carolina study areas, the CEC compounds most frequently detected in oyster tissues and sediments were the PFCs, the PBDE flame retardants, and current use pesticides. Perfluorinated compounds are widely used to make consumer products resistant to stain, grease, and water. As a result of their widespread use, PFCs are becoming ubiquitous in the environment and are suspected endocrine disruptors, which may cause developmental problems in animals. Among the 13 PFCs that were targeted as part of this study, seven were detected in both sediment and tissue, mostly in the Patapsco River of the Chesapeake Bay. The three most commonly detected PFCs (perfluorooctane sulfonate (PFOS), perfluorooctanoic acid (PFOA), and  perfluorohexanoic acid (PFOSA)), have been linked to neurotoxicity. Flame retardants (PBDEs) were found in all sediment and oyster samples in both Maryland and South Carolina. PBDEs in human fat tissue have not been linked to cancer in people, but their impacts to animals and the environment are unknown.

Current use pesticides were also detected in oysters and sediment at various levels in both study areas. In the Chesapeake Bay, eight of these pesticides were detected, with the herbicide desethylatrazine detected in 80 percent of the oyster samples, and ametryn and atrazine found in 100 and 80 percent of the sediment samples, respectively. Ametryn and atrazine are contemporary herbicides widely used in the U.S. to control pre and post-emergence of broadleaf weeds in corn fields. Ametryn in particular, is known to cause acute dermal and inhalation toxicity. The highest concentrations reported in Charleston Harbor sediment were for the pyrethroid insecticides permethrin and cypermethrin, both of which are household pesticides, used to control insects on yards and the landscape. The downside about perythroid and cypermethrin is their toxic effects on non-target organisms like bees, mayflies, and fish. Contemporary pesticides are manufactured to replace older, banned organochlorine pesticides. While most of these new pesticides are designed to avoid accumulation within organisms and engineered to be less toxic, many find their way into aquatic systems as evidenced by these results.

Overall, our results indicated that the occurrence and distribution of some CEC chemicals may be associated with land use categories in watersheds adjacent to the survey sites. Although further study is required to confirm this association, in general, the number of reported concentrations at urban sites was elevated compared to the suburban sites in both study areas. The same relative numbers were observed between suburban and undeveloped (or reference) sites. Spatial distribution of the contaminants tends to indicate that pharmaceuticals and personal care products, and industrial chemicals (PFCs), tend to be more prevalent in the industrialized and urbanized watersheds (Patasco and Severn in the Chesapeake Bay, and Charleston area in Charleston Harbor), while current use pesticides were found in the low developed areas of both study areas.

For management purposes, these data constitute unprecedented baseline information on CECs. With the exception of an existing EPA health advisory for PFCs in drinking water, there are currently no federal standards nor guidelines to assess the maximum contaminants threshold for the majority of CEC chemicals in the environment. Thus, although organisms in the environment may be exposed to these chemicals, as this study shows, it is challenging to relate environmental concentrations of CECs to impacts on organisms. However, the detection of these compounds in sediment and oyster tissue is evidence of their presence and potential accumulation in the environment and in our coastal resources.

Next Steps
Data from this study will augment our knowledge of the distribution of CECs in coastal areas. To obtain a broader perspective across different land use types and other bivalves that Mussel Watch uses nationally (blue mussels, oysters, zebra mussels), we are conducting pilot studies in the Gulf of Maine and the Gulf of Mexico.