Results indicated that CECs are being accumulated at various degrees in coastal resources and the environment, with the most common to both study areas being perfluorinated compounds (PFCs), the flame retardants, and current use pesticides. In the Chesapeake Bay, at least one PFC and PBDE flame retardant was found across all sediment samples, with PFCs and PBDEs detected in 40 percent and 21 percent, respectively. Alternative (non-brominated) flame retardants were the least detected of all CEC classes. The highest concentration CECs found in Maryland oyster tissues were linked to the pharmaceuticals prednisone, hydrocortisone, and acetaminophen. PPCPs, on the other hand, were detected far less frequently than PBDEs and PFCs in Maryland tissue and sediment.

Like in the Chesapeake Bay samples, at least one CEC was detected at each South Carolina station for both sediment and oysters samples, and overall CEC detection frequencies followed a similar overall pattern. PFCs were the most common in sediments and oysters. The flame retardants were also often detected in both sediments and oysters in South Carolina samples. The highest concentrations reported in Charleston Harbor sediments, however, were for current use pesticides. 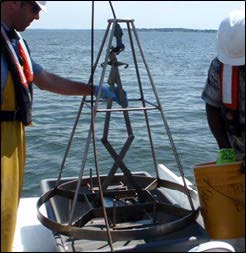 Overall occurrence and distribution of some CEC chemicals appeared to be associated with land use from the watershed next to the survey sites. Although further study is required to confirm this association, in general, the number of reported concentrations at urban sites was elevated compared to the suburban sites in both study areas. The same relative numbers were observed between suburban and undeveloped (or reference) sites.

For management purposes, these findings constitute unprecedented baseline information on CECs. With the exception of an existing EPA health advisory for PFCs in drinking water, there are currently no federal standards nor guidelines to assess the maximum contaminants threshold for the majority of CEC chemicals in the environment. Thus, although organisms in the environment may be exposed to these chemicals, as this study shows, it is challenging to relate environmental concentrations of CECs to impacts on organisms. Overall, the detection of these compounds in sediment and oyster tissue is evidence of their presence and potential accumulation in the environment and in our coastal resources.

NOAA’s Mussel Watch Program has monitored the nation’s coastal waters for chemical contaminants and biological indicators of water quality since 1986. With the goal to support ecosystem management nationwide, Mussel Watch and its sister program, the National Bioeffects Program, conduct environmental monitoring, assessment, and research to describe the status and trends in the environmental quality of the nation’s estuarine and coastal waters. In response to recent public concerns about the widespread distribution and potential impacts of these unregulated contaminants, NCCOS, through the Mussel Watch Program, has investigated the prevalence and magnitude of CEC chemicals in our coastal areas through a series of pilot studies.