Harmful algal blooms (HABs) are increasing in frequency and pose a threat to human and environmental health. Blooms of Karenia brevis occur nearly annually along the Florida coast which has led to intense study. Less is known about the processes that drive blooms which affect the western Gulf of Mexico (GoM). This project will determine the processes that drive K. brevis blooms in the western GoM and lead to better mitigation of blooms along the Texas coast. 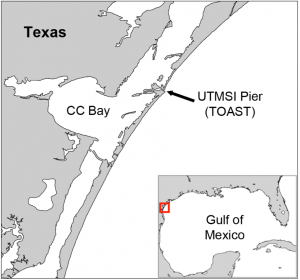 Blooms of K. brevis occur nearly annually along the Florida coast, which has led to intense study of K. brevis HABs in the eastern GoM. In contrast, much less is known about K. brevis blooms that affect the western GoM, even though they appear to be occurring with increasing frequency along the lower Texas coast. As a result, almost all hypotheses regarding K. brevis bloom processes are derived from studies in the eastern GoM (or in the lab); their relevance to the western GoM remain untested.

This project will identify both the unique and shared drivers of K. brevis blooms across the GoM. Notable outputs include the first measurements of in situ grazing rates on K. brevis, quantification of the impact of endogenous cell death on K. brevis bloom decline, and an improved model of K. brevis blooms for the western GoM. The work directly contributes to understanding community ecology and ecosystem dynamics, including top-down and bottom-up control of HABs. Efforts to analyze cell physiology and gene expression will increase understanding of the factors controlling HAB growth by focusing on harmful algal genetics and physiology. All project PIs work closely with Texas agencies responsible for HAB monitoring, ensuring project outcomes will enhance management knowledge and inform efforts to develop improved K. brevis bloom forecasts.

While physical processes are a primary determinant of bloom initiation in the western GoM, other factors may modify its effects or act at later stages of the bloom life cycle, e.g. termination. Specifically, we use a combination of modeling, ecological, physiological, and genomic methods to evaluate the following hypotheses regarding environmental and cellular drivers of K. brevis blooms in the western Gulf of Mexico: (1) K. brevis is subject to lower grazing pressure than the community as a whole, thereby facilitating bloom formation, (2) K. brevis blooms occur under low DIN:P conditions and an abundance of organic N, which contributes to bloom persistence, and (3) endogenous cell death in K. brevis occurs at rates similar to that observed in A. tamarense blooms, contributing to bloom decline. 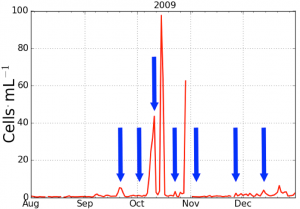 To examine these hypotheses, researchers combine detection by an Imaging FlowCytobot and forecasting by physical models to identify the earliest stages of a K. brevis bloom. Observations and experiments commence at bloom initiation and continue through termination, including analysis of nutrients, microzooplankton grazing, cell death markers, and gene expression. The results will be used to modify the existing individual based model of K. brevis blooms, which will be validated against field observations.