This project developed a prototype operational statistical nowcast/forecast system for three harmful algal bloom (HAB) organisms in the Chesapeake Bay ecosystem, specifically the dinoflagellates Karlodinium veneficum, Prorocentrum minimus, and the cyanobacteria Microcystis aeruginosa, to predict the probability of blooms in the Bay and its major tributaries for use by state and federal agencies to improve their HAB response. 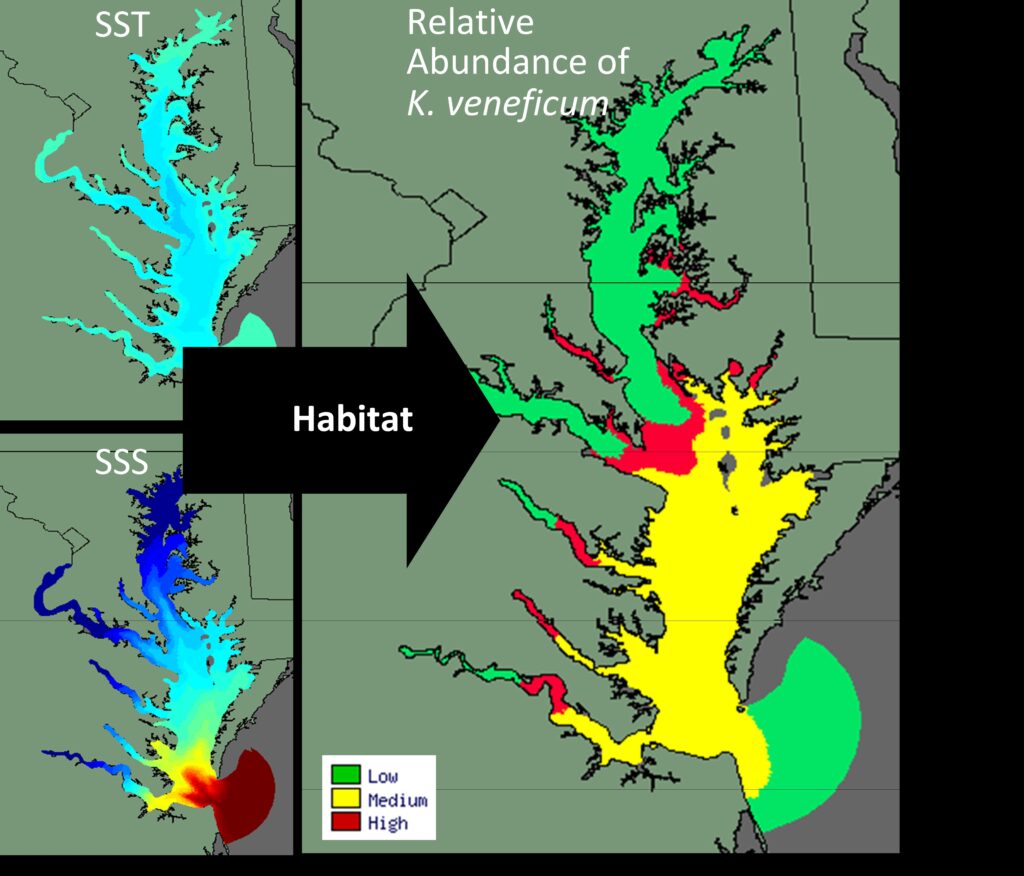 Why We Care
Over 1,400 phytoplankton species have been identified from the Chesapeake Bay and its tidal tributaries, including 37 potentially harmful species, many of which produce seasonal blooms. The most prevalent and potentially toxic HAB species include Alexandrium monilatum, Cochlodinium polykrikoides, Microcystis aeruginosa, Prorocentrum minimum, and Karlodinium veneficum. Blooms of these species may impact regional finfish and shellfish populations and degrade water quality conditions in addition to affecting water based industries and human health.

The variety of harmful algal bloom (HAB) species, their broad geographic distribution, and the breadth of their impact on different ecosystem components create complex resource management issues that often require complex, integrative approaches to address them. Ecological forecasts are one type of integrative HAB research product that can assist coastal managers in better managing our resources.

What We Did
In 2005, the NCCOS Monitoring and Event Response for Harmful Algal Blooms Program (MERHAB) initiated a 5-year project centered in Chesapeake Bay entitled “Development and Implementation of an Operational Harmful Algal Bloom Prediction System for Chesapeake Bay.”  The project had a primary goal to develop and implement an operational harmful algal bloom prediction system for Chesapeake Bay and its major tributaries. Co-investigators at the Maryland Department of Natural Resources incorporated the products into their plans to improve their HAB response and monitoring capabilities. This project built on a previously NCCOS-funded sea nettle forecast system expanded to include biogeochemicals, hydrodynamics, habitats, HABs and pathogens under development for the Chesapeake Bay. Coupling and integration of these models into a unified ecological prediction system was a long-term goal.

In order to meet the goal, the project achieved the following tasks:

1) Developed and implemented empirical habitat models for HAB species that predicted the probability of a bloom as a function of each species preferred environmental conditions;

3) applied the habitat model of each species to the relevant environmental variables to nowcast and forecast the probability of their blooms throughout Chesapeake Bay and its tributaries;

5) enhanced an existing web page to disseminate these predictions of HAB bloom probability to managers, researchers, and the general public.