Characterizing Spatial Distributions of Deep-sea Corals and Chemosynthetic Communities in the U.S. Gulf of Mexico

We compiled observations of deep-sea corals and chemosynthetic communities from field surveys and developed spatial predictive models for these organisms and habitats in the U.S. Gulf of Mexico. Maps and geospatial data depicting the observed and predicted distributions of these organisms and habitats can be used to inform environmental risk assessments, environmental impact statements, and other decision-support documents related to the review of proposed offshore energy development in the region.

Why We Care
Deep-sea corals, also known as cold-water corals or deepwater corals, can create local hotspots of biodiversity by providing three-dimensional structure that increases the complexity of habitats available for use by other organisms, such as fishes and echinoderms. They are generally long-lived, slow-growing, and fragile, making them vulnerable to human impacts. Similar to deep-sea corals, habitats created by chemosynthetic fauna at cold seeps (i.e., locations where fluids containing reduced chemicals like methane and sulfide emerge from beneath the seafloor) may increase habitat heterogeneity.

The Bureau of Ocean Energy Management (BOEM) manages the development of energy and mineral resources in the U.S. Gulf of Mexico in an environmentally and economically responsible way across the approximately 160 million acres (approximately 650,000 km2) of the Gulf of Mexico Outer Continental Shelf (OCS) region. Offshore energy projects often include activities that may physically disturb the seafloor and could negatively affect benthic biota. BOEM has identified deep-sea corals and chemosynthetic communities as sensitive deep-water biota and included requirements in their Notices to Lessees (NTL No. 2009-G40) for oil and gas operators to avoid such habitats in the Gulf of Mexico. Having the most comprehensive and up-to-date information on the spatial distributions of deep-sea corals and chemosynthetic communities is essential for BOEM to assess the potential impacts of offshore energy development on the marine environment in the Gulf. 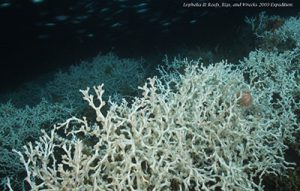 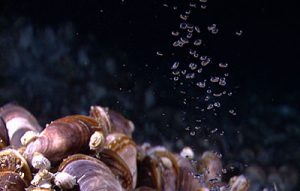 Bubbles of methane gas rise through a mussel bed at the Pascaguola dome. Credit: NOAA Office of Ocean Exploration and Research. 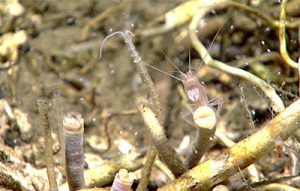 A dense cluster of Escarpia sp. chemosynthetic tubeworms at a cold seep, accompanied by an Alvinocaris sp. shrimp and a chaetopterid polychaete waving its pair of feeding palps from its slender bamboo-like tube. Credit: NOAA Office of Ocean Exploration and Research.

What We Did
This study had three main components:

We prepared a technical report that summarizes the findings of the study and a digital data package containing the database of observations of deep-sea corals and chemosynthetic communities and geospatial data layers depicting the model predictions and the environmental predictors used in the models. This data package will be publicly available for download via NOAA’s National Centers for Environmental Information (NCEI).

Benefits of Our Work
The maps and data products developed for this study will be used by BOEM to inform and support environmental risk assessments, environmental impact statements, and other decision-support documents related to the review of proposed offshore energy development in the region. The maps and data products can also be used to inform other regional ocean planning and management decisions for proposed activities that could impact these sensitive benthic biota and to guide future ocean exploration in the Gulf of Mexico.