Are Growth and Toxicity of the Dinoflagellate Alexandrium Controlled by Grazer-induced Defense?

Blooms of Alexandrium fundyense result in economic losses to fisheries, aquaculture, and pose public health risks. Typically, A. fundyense growth and toxicity are seen as dependent on light, temperature, and nutrients. New evidence shows that grazers (copepods, bivalves, sea squirts) induce toxin production and decrease growth rate. The tradeoff between toxin production and reduced growth is not well understood nor recognized in population models. We will determine the controls of grazer-induced toxin production on cell toxin content and cell growth of A. fundyense. 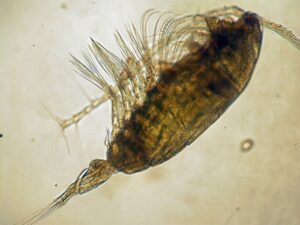 Why We Care
The dinoflagellate alga Alexandrium fundyense produces a suite of potent neurotoxins (saxitoxin and its derivatives) resulting in Paralytic Shellfish Poisoning (PSP). PSP is known to impair physiological functions in bivalve molluscs and copepods. Saxitoxin can be transferred throughout the food web until it reaches humans. PSP in humans include numbness, paralysis, disorientation, and even death. Hence, toxic Alexandrium spp. blooms represent a threat to public health, to the fishing industry, and to the marine food web.

Alexandrium is commonly distributed in coastal waters worldwide. Biogeographic variation in the toxin content and bloom characteristics of Alexandrium throughout the northeast coast of North America is well documented. Blooms of highly or moderately toxic Alexandrium occur annually along the east coast of Canada, the Gulf of Maine, and south to Massachusetts Bay. South of Massachusetts Bay, there are isolated Alexandrium blooms off Cape Cod and the southeastern New England coast in enclosed embayments and salt ponds. These southern blooms have lower toxicity and occur less regularly. A. fundyense blooms are now common in waters of Long Island Sound during late spring and early summer.

The typical approach to modeling Alexandrium bloom dynamics uses information on environmental factors (e.g., light, nutrients, temperature, salinity) to predict cell growth rate and cell toxicity, and assumes either a constant loss rate due to grazing, or a temperature-dependent grazing mortality. The usual framework for studies and models of Alexandrium population dynamics (and harmful algal blooms (HABs) in general) is that the environmental factors control the cell growth rate and toxin content, and that grazing is independent or little affected by cell abundance. It is also assumed that grazing has no bearing on cell growth or toxin content.

Our research shows that such assumptions may not always be valid, in which case predictions from models will be inaccurate. More importantly, the lead scientist for this project makes the case that the role of grazers in cell growth and toxin content of Alexandrium (and likely other toxic phytoplankton) must be reconsidered.

For each of these questions, our experiments will measure grazer-induced toxin production for several types of grazers, the associated changes in cell growth rate, and relative gene expression (response) of genes involved in saxitoxin biosynthesis and cell growth. From these measurements, we will determine the benefits and costs of toxin production for input into bloom models.

This project is led by Professor Hans Dam at the University of Connecticut–Avery Point and is part of the NCCOS Ecology and Oceanography of Harmful Algal Blooms (ECOHAB) Program.

Benefits of Our Work
This work is novel because it considers, for the first time, a systematic investigation of the benefits and costs of grazer-induced toxin production, which in turn affect cell growth and cell toxin content. The tradeoff between toxin production and cell growth may have profound impacts on the population dynamics of Alexandrium and other HAB species, exert bloom control, and affect food web dynamics. The outcome of the project is a revised conceptual model of HAB population dynamics. Results will be incorporated into operational HAB forecast models for A. fundyense and other HAB species in the Gulf of Maine and other regions.