A research paper, supported in part by NCCOS, measuring the metabolic cost to a red tide dinoflagellate to defend itself against predation (consumption) has been recommended by the prestigious Faculty Opinions as one of special significance in its field. The recommendation notifies others in the field of study, and beyond, that the paper is considered exciting and highly important emerging research. The research presents a novel framework to incorporate the cost of defense in toxin-producing prey/predator relationship models.

Prey defense against a predator, e.g., prey producing a deterring toxin, is common in microbes, plants and animals. Current theory suggests, in most cases, a prey’s defense is “induced” (initiated) in the presence of the predator since there is a cell growth-limiting metabolic cost to producing the defense mechanism (e.g., a toxin). Thus, because of the cost involved, a defense mechanism is usually only produced and used when needed. 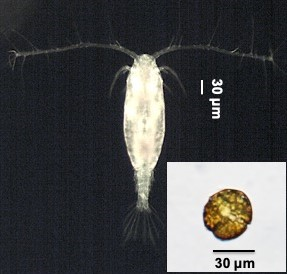 The study asks the question are growth and toxicity of the dinoflagellate Alexandrium controlled by grazer-induced defense? In theory (as expressed by the study and Faculty Opinions), if there is a substantial fitness cost to maintaining a defense, then the prey should evolve some means of detecting the predator and using defense mechanisms only when the predator is present. If there is no cost to defense, then there is no reason not to have the defense present at all times, and there is no need to detect the predator since the prey is always defended.

Despite the logic of this argument, documenting such costs scientifically has proven very difficult, especially for chemical defenses such as toxins used by phytoplankton vulnerable to grazing by zooplankton. A defense fitness cost should result in a trade-off between the use of the defense and individual growth. Yet, previous experimental work has failed to clearly detect such induced defense cost in toxic phytoplankton.

The study, published in Proceedings of the Royal Society B, measured a potential direct fitness cost of copepod (Acartia hudsonica) grazer-induced toxin production in a harmful algal bloom (HAB) dinoflagellate prey (Alexandrium catenella) using relative gene expression (RGE) of a cell division gene labelled “cyc.” The gene “cyc” (“cyclin”) is a marker that correlates to cell growth. This approach disengages the reduction in cell growth due to defense cost from the mortality by consumers and quantifies the cost of defense.

Treatments where the dinoflagellate were exposed to copepod grazers significantly increased toxin production while decreasing RGE of cyc, indicating a defense-growth trade-off. The defense fitness cost represented a mean decrease of the cell growth rate of 32%. Simultaneously, the researchers estimated that the traditional grazing equation method used to measure mortality loss by consumers/grazers (Frost 1972) overestimated by 29%. The defense mechanism appears adaptive, as the Alexandrium prey population persists in a quasi-steady state after the defense is induced by the copepod predators.

This approach provides a novel framework to incorporate the fitness cost of defense in toxigenic prey–consumer interaction models and more specifically, operational HAB forecast models for Alexandrium catenella and other HAB species in the Gulf of Maine and other regions.

Read the Faculty Opinions recommendations by Dr. Nelson Hairston Jr of Cornell University here. This research is derived in part from an NCCOS-sponsored ECOHAB project led by Professor Hans Dam of the University of Connecticut, Avery Point. 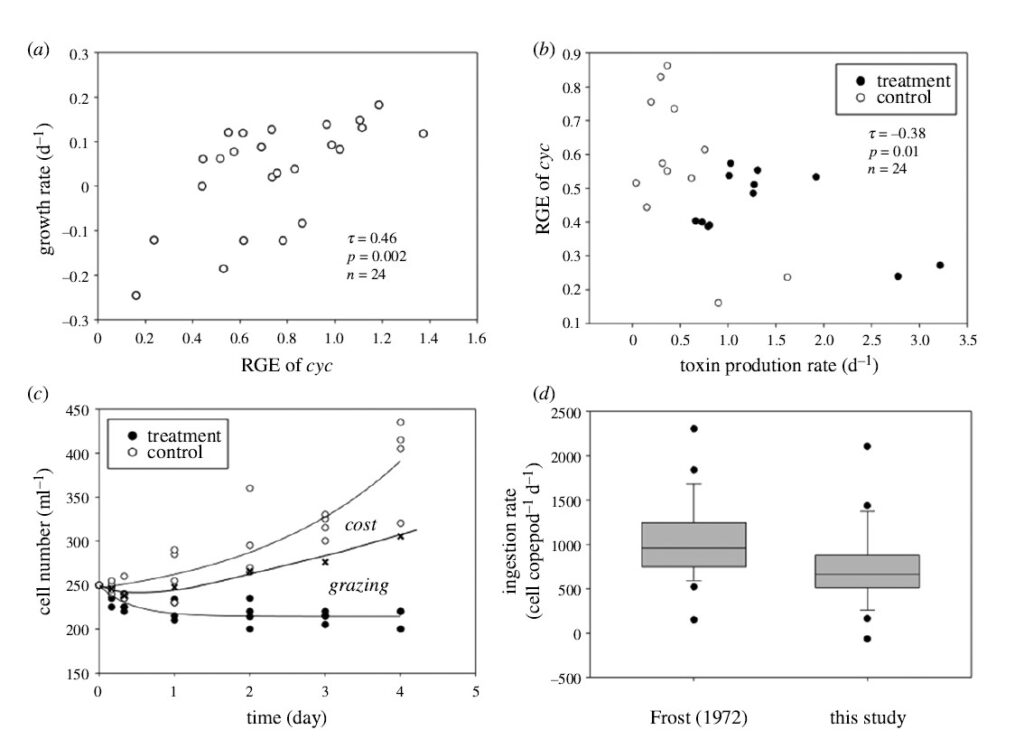 Relative gene expression (RGE) of growth-related gene (cyc) versus cell growth rate in the control (a), and between toxin production rate (µtox) and growth rate calculated by the regression of figure 3a (b), the changes in cell concentration owing to fitness cost and grazing (c), and copepod ingestion rates (d) during the grazing assay. In (c), the difference between the upper and middle line is the cell loss owing to the defense fitness cost, and the difference between the middle and lower line represents the cell loss owing to the grazing. (d) compares copepod ingestion rates estimated by the traditional grazing equation (Frost 1972) versus the modified ingestion rate that accounts for the reduction in cell growth rate owing to toxin production (this study). . Boxplot represents the second and third quartile of data, line in the box is the median, dots are outliers and the error bar represents the range of observations. Lines are regression fits. Credit Figure 3, Park and Dam, 2021.

NCCOS Leads from Research to Application for Rapid Biotoxin Screening