Along the U.S. Pacific Coast, many estuaries are not permanently open to the ocean, but shift between open and closed states. A NCCOS-supported study tested the hypothesis that intermittently-closed estuary marshes are more resilient to sea-level rise than open-estuary marshes. 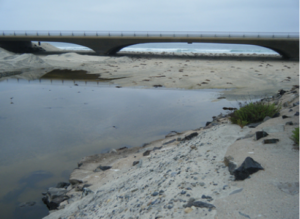 Estuaries are brackish water environments traditionally thought of as open to the ocean with one or more freshwater rivers or streams flowing into them mingling with waves and tides from the sea. However, in some estuaries the entrance is not permanently open to the ocean but shifts between open and closed states. These bar-built intermittently-closed estuaries (ICEs) may take many forms but are typically found on wave dominated coasts with high sediment loads and variable river or creek inflow that allow waves to build a sand barrier across the mouth. There is a range of closure from the ocean ranging from days or even years with a single seasonal closure being most common.

Using California as a case study, the NCCOS-sponsored researchers from USGS and U.C. Davis conducted a spatial analysis comparison showing that marshes in ICEs had significantly greater elevations than marshes in permanently open estuaries. Using a model, they determined marsh elevation change under 840 simulated responses to sea-level rise to 2100. The closure-scenario modeling showed that regular annual ICE closure can promote sediment accretion rates and increase marsh elevations fast enough to match even high rates of sea-level rise. Also, estuaries that have a closed mouth phase contain marshes with higher elevations than in perennially open estuaries.

Intermittently closed estuaries are critical environments where marshes may be sustained under high rates of sea-level rise, thus reducing the anticipated global loss of these important ecosystems. California ICEs represent a globally-important resource; in southern California alone, they make up more than 5% of global ICEs according to the study. 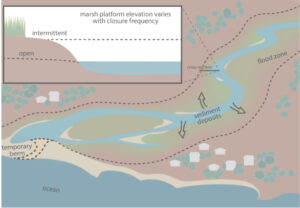 Conceptual model of the biophysical marsh processes and water levels for intermittently-closed estuaries (ICEs). ICEs are closed to ocean influence a portion of the time usually by a sand-built berm which can be breached by waves and/or high watershed flows. Marshes (green) in ICE have higher marsh platforms when compared with marshes in perennial open estuaries (For interpretation of the references to color in this figure legend, the reader is referred to the Web version of this article). Credit Thorne et al, 2021.

California ICEs are known for their biodiversity and contributions to the economic viability of the surrounding communities. All ICEs in southern California have state and federal endangered species including marine protected species, California ICEs are vulnerable ecosystems and one of the most sensitive estuary types to human activities. This is because they are generally small and easy to modify as well as located near rapidly expanding urban centers or agriculture landscapes which can alter watersheds and diversity. Over the last hundred years, many California ICEs have undergone drastic adverse effects from human modifications that include disturbance in water inflow and outflow, mouth stability to prevent closure, runoff from urban areas, salinity imbalances, and species invasions.

The study shows that inlet closures can increase marsh accretion and build resilience to sea-level rise and prevent submergence, when coupled with sediment delivery events. When considering sea-level rise, maintaining the possibility of inlet closure and ‘natural’ breach events is important to allow water levels to rise and inundate high marshes, which is necessary for building or maintaining marsh elevations and thus resilience. This implies a need to assess the trade-offs in how land-use management affects tidal and marsh processes. The results identify an important topic for management consideration and further research needs.

Published in the journal Estuarine, Coastal and Shelf Science, the study was supported in part by the NCCOS Effects of Sea Level Rise Program (ESLR) project Marshes on the Margins: Developing Tidal Wetlands Adaptation Strategies in Southern California.