NCCOS-sponsored researchers and their partners conducted one-day intensive water sampling events in 2018 and 2019 to create high spatial resolution snapshots of the amount and locations of cyanobacterial toxins across western Lake Erie. The synoptic, harmful algal bloom (HAB) sampling of 100 locations in 2018 and 172 locations in 2019 was unprecedented. The work is documented in the latest issue of Harmful Algae.

Remote sensing allows researchers to monitor cyanobacterial blooms in large lakes. However, monitoring cyanobacterial toxins is only feasible through water samples, also known as “grabs.” Due to the logistical and budgetary hurdles of collecting and processing large numbers of samples, only sporadic sampling is realistic. But sporadic sampling results in uncertainties in the spatial distribution of toxins.

In response, NCCOS-sponsored researchers at The Ohio State University and partners from other institutions and agencies (including Canada) conducted two intensive “HABs Grabs” of microcystin-producing Microcystis blooms in western Lake Erie. Microcystins are a class of potent liver toxins produced by some freshwater cyanobacteria, such as Microcystis.

The two six-hour, one-day sampling events to estimate the total mass of microcystins during the peaks of the annual cyanobacteria bloom took place on August 9, 2018 and August 7, 2019. The sampling covered approximately 876 square miles. Based on the team's analyses of the water samples they collected, there were an estimated 25,381 pounds and 67,662 pounds of microcystins in the western Lake Erie basin during the 2018 and 2019 HABs Grabs, respectively. 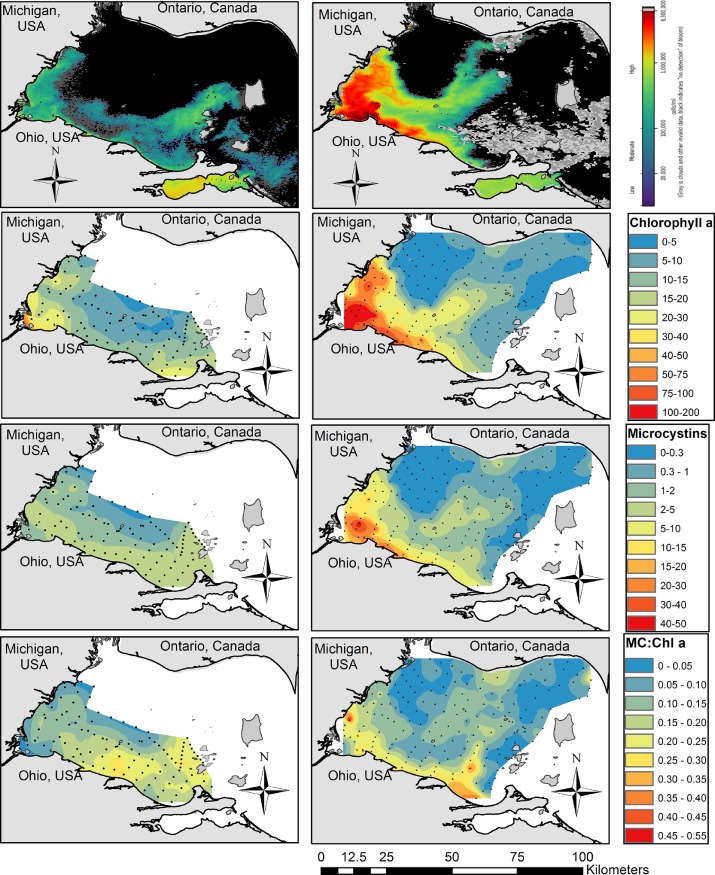 The HABs Grab data set is the largest single-day characterization of the Lake Erie cyanobacteria-dominated blooms. While there have been previous studies in Lake Erie, those studies grouped microcystins and cyanobacterial biomass data collected from just a few sites and throughout the months-long summer growing season.

The study offers insight into the care that must be taken in interpreting data from less intensive sampling. The bloom boundary poses substantial issues for spatial assessments because microcystin concentration varies by nearly two orders of magnitude over very short distances (Figure 1). The microcystins to chlorophyll ratio (MC:chl) varied by a factor up to 5.3 throughout the basin, which creates challenges for using MC:chl to predict microcystin concentrations. More frequent microcystin data collection can overcome these issues, but can be a costly and logistically daunting task.

The HABs Grabs highlighted limitations of the current Lake Erie cyanoHABs monitoring network. The collection and laboratory processing of 100 (or 172) water samples in one day is not feasible to conduct on a routine basis. Therefore, it is paramount to develop and validate models that can forecast microcystins over a large area.

Total mass estimates are useful for researchers studying cyanoHAB toxin dynamics and the relationships to environmental triggers on an ecosystem scale. However, local microcystin concentrations are more important for managers and the public because of the associated human health risks (e.g., concentrations at municipal water intakes).

Read more about the Lake Erie HABs Grabs in the Ohio State News.