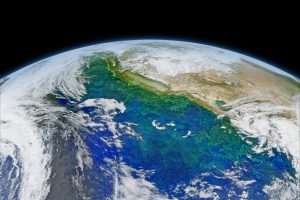 The waters along the west coast of North America are some of the most biologically productive in the world. Cool water from high latitudes flows southward from the edge of British Columbia to Baja; this is the California Current. Credit: NASA Earth Observatory

A new study estimated the sensitivity of different groups of marine species to ocean acidification (OA)within the California Current ecosystem. Species groups were designated based on having similar functions in the ecosystem (i.e. urchins, oysters, phytoplankton, zooplankton), and the OA sensitivity for each group was determined based on previous studies. Most functional groups of species (26 of 34) responded negatively to increasing OA conditions, but when uncertainty in sensitivity was considered, the negative correlations dropped to 11 of 34. Further research to confirm certainty about the sensitivity of species and functional groups to OA is important for developing robust scenarios for ecosystem projections.

OA occurs when carbon dioxide in the atmosphere is absorbed by ocean waters, changing ocean chemistry towards a more acidic environment, and is projected to increase with climate change. While the chemical reactions are straightforward and relatively well-known, the effects on marine life are not. OA has the potential to restructure food webs and ecosystems, depending on how sensitive different species may be to OA. Managers and other stakeholders need to understand how ecosystems might change due to projected changes in ocean carbon chemistry, but species response can be uncertain due to both a lack of knowledge and conflicting results from laboratory studies. 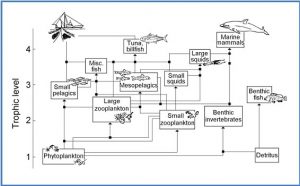 The project is modeling OA impacts using Ecopath. This schematic is an example illustration of a food web, produced with the Ecopath ecosystem modelling software. Credit: Ecopath