Reviews of Our Current Understanding of Harmful Dinoflagellates Published

In a recently released book on dinoflagellates, three chapters update knowledge of and changing views for the red tide alga Karenia brevis and the estuarine Pfiesteria-like dinoflagellates Pfiesteria piscicida and Karlodinium veneficum respectively. These algae came under intense scrutiny in the 1990s due to fish kills and unusual mortality events associated with their blooms. NCCOS funding contributed to the research findings. 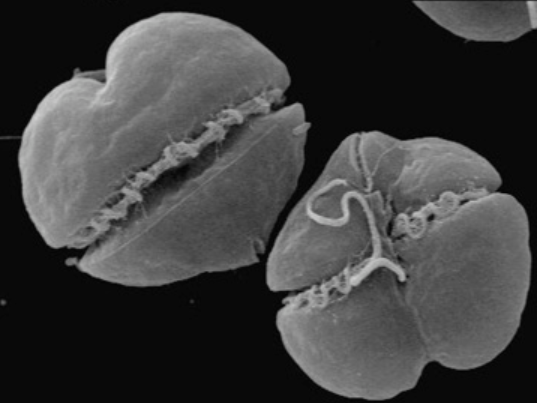 Karenia
“Ecophysiology and Bloom Dynamics of Karenia with Emphasis on Karenia brevis in Florida Waters” (Chapter 8) is based on the massive data collected in the field and cultures on the biology and ecology of the red tide species Karenia brevis and K. mikimotoi and their production of neurotoxins that cause neurotoxic shellfish poisoning. This review includes data collected and synthesised from various sources, especially the Florida Fish & Wildlife Conservation Commission and NCCOS supported projects. The review reveals linkages between offshore and nearshore processes and the existence of ecological niche versatility in Karenia species. Strategies such as vertical migration, allelopathy and mixotrophy (having both photosynthetic and carnivorous abilities) broaden survival abilities.

In spite of these similarities, differences are noted between K. brevis, K. mikimotoi, and the other Karenia species in their capacity to produce toxins, the frequency and magnitude of blooms, and their biogeographic distribution. Life forms (size and shape) and corresponding ecological attributes (e.g., large, slow growing offshore species vs small, fast growing inshore species) coupled with “chance” in being at the right place and the right time to gain growth advantage, provides a conceptual framework to understand Karenia and similar species. 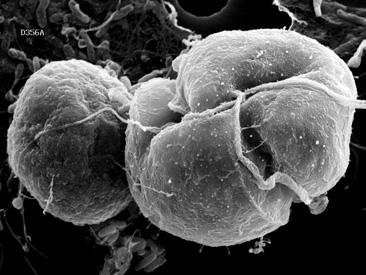 Karlodinium
“Karlodinium veneficum: Still Blooming and Toxic Sixty-Two Years later,” (Chapter 10) summarizes the knowledge learned about the coastal and estuarine “Pfiesteria-like” dinoflagellate Karlodinium since its identification in 1956 (initially described as Gymnodinium veneficum). A very small dinoflagellate, it has a mixed nutritional mode relying on both photosynthesis and phagotrophy (carnivory) for growth (mixotrophy), similar to Karenia. It is frequently found in low abundances but is capable of forming intense blooms often associated with fish kills. The ability to kill fish results from production of toxic compounds known as karlotoxins. These toxins have been characterized both in the laboratory and in the field and have hemolytic, ichthyotoxic, and cytotoxic properties.

Research has shown that in Karlodinium, toxin accumulation in the cell is inversely related to growth rate. This suggests that in the field, environmental conditions that favor slow or halted growth (e.g.. a stationary growth phase), also favor toxin accumulation that contribute to fish kills. Evidence also exists that the same toxins (karlotoxins) responsible for fish kills also have other functions as well such as prey-immobilization, grazing deterrence and killing competing organisms (allelopathy). These later functions likely play a critical role ecology and population growth of Karlodinium, which is now recognized as a cosmopolitan species with extensive ecosystem impacts. The chapter authors also note that toxic vs non-toxic strains have different benefits and costs related to grazing and parasitism versus growth. This is due to toxin production requiring energy and cellular material that slows the overall growth rate of the cell.

A better understanding of when environmental conditions favor the toxic versus non-toxic strains will aid in our ability to manage and forecast the severity of Karlodinium blooms. See recent NCCOS activities involving Karlodinium here. 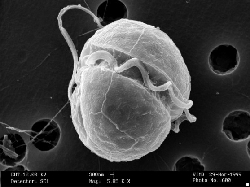 Pfiesteria
“Pfiesteria: a Common Estuarine Dinoflagellate with a Colorful Past,” (Chapter 9) summarizes 20 years of Pfiesteria research. The emergence of the Pfiesteria issue in the late 1990’s was highly controversial and had a major impact on research for harmful algal blooms (HABs). The possible production of toxin and its role in adverse human health effects, fish kills, and ulcerous lesions observed on fish in coastal North Carolina and Chesapeake Bay became highly politically charged. It received extensive press coverage and had major adverse economic impacts on tourism and consumption of fish and shellfish. Academic institutions and government agencies mobilized quickly to try and understand what was going on. The Pfiesteria issue spurred the rapid development and adoption of molecular techniques for detection, quantification and monitoring of HAB species.

Pfiesteria piscicida, meaning “fish killer,” lacks chlorophyll and is more of a flagellated animal than a plant. It was first observed in 1991, but not formally described until 1996. By this time there was growing controversy within the scientific community regarding the role, if any, in fish kills and fish lesions. Over the next decade additional similar “Pfiesteria-like dinoflagellates” (e.g., Karlodinium venificium) were found to be associated with the fish kills. The next decade would involve intense debate on the roles of Pfiesteria in fish kills, their life cycle, toxicity and especially the hypothesized human health effects. The chapter presents the data from the years of research as well as the different views on the controversial topics involving Pfiesteria and the Pfiesteria-like dinoflagellates.

The chapter confirms Pfiesteria is indeed a common estuarine dinoflagellate, but not a threat to human or animal health as originally portrayed. The fish kills and lesions originally ascribed to Pfiesteria were based on laboratory studies in laboratory tanks that contained order of magnitude more Pfiesteria cells than ever observed in nature once methods of reliably distinguishing Pfiesteria from Karlodinium became available. Based on these abnormal conditions, Pfiesteria cells will feed directly on the skin cell of the fish using a process known as myzocytosis. Fish in the tanks could not swim away from attack as they would in the field and the resultant loss of epidermal skin cells disrupted the fish’s ability to osmoregulate to such an extent death ensued. The skin lesions observed on fish in the tanks were also quite different from those observed in the field.

Despite this difference, the fish deaths and lesions observed in the tank were assumed without confirmation to reflect what was happening in the estuary when fish kill were accompanied by a large number of what were identified as “Pfiesteria” cells. Subsequent work indicates the high densities of “Pfiesteria” cells in the original studies were actually misidentified Karlodinium cells. Further, the cause of the fish lesions in the field were definitively shown to be caused by a common water mold infection. The complex, never before observed, multi-stage life cycle initially reported, deemed critical of Pfiesteria’s ability to kill fish, was also shown to be a much simpler one typical of other dinoflagellates. Despite extensive investigations, no adverse human health impacts from contact with waters where Pfiesteria occurs have been confirmed.