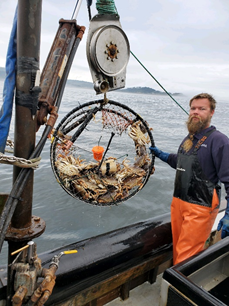 NCCOS-supported researchers deployed 40 low-cost oxygen sensors on crab pots in 2020 to enable commercial Dungeness crab fishermen to detect and track the onset of low oxygen (or hypoxic) events off the Oregon coast from Astoria to Brookings.

Hypoxia is a recurring challenge for fishermen in the Pacific Northwest. Low oxygen events have resulted in die-offs of marine life on the seafloor. When hypoxic events form, the Dungeness crab fishery, one of the region’s most valuable fisheries, can find their pots empty, as crabs move away from traditional fishing grounds, or full of dead crabs.

This project, led by Oregon State University scientists, worked in close partnership with the Oregon Department of Fish and Wildlife, NOAA’s Northwest Fisheries Science Center, and representatives from Oregon’s Dungeness crab fishing fleet, had fishermen deploy the cellular-network enabled sensors on their crab pots. This ensured that data on where and when low oxygen zones were forming off the Oregon coast were available, allowing fishermen to make at-sea decisions on areas to avoid fishing because of declining oxygen concentrations. This data is also being used to create a map of areas that face recurring episodes of hypoxia, as well as identify areas of refuge where the dangers of hypoxia are lowest.

This project is part of the NCCOS Coastal Hypoxia Research Program (CHRP).

Read more about the project in the Oregon Stater magazine.