An NCCOS-sponsored study has validated a 40-year old theory that the Chesapeake Bay bloom-forming harmful alga Prorocentrum minimum has a seasonal life strategy that depends on physical transport by estuarine circulation. Furthermore, the study shows that P. minimum cells are not introduced into the bay from the Atlantic Ocean, but result from decaying blooms that are transported seaward by the estuarine outflow from the previous year’s bloom. This seasonal cyclical transport perpetuates a self-sustaining life cycle independent of outside cell seeding.

The novel mechanism proposed by Tyler and Seliger (1978) was that physical transport by estuarine circulation brings P. minimum cells from lower bay to the mid-bay in spring when they bloom. To test this theory, this study used a 3D-coupled hydrodynamic-biogeochemical model (ROMS-RCA) to simulate the annual cycles of P. minimum in Chesapeake Bay and track its life history over multiple years. 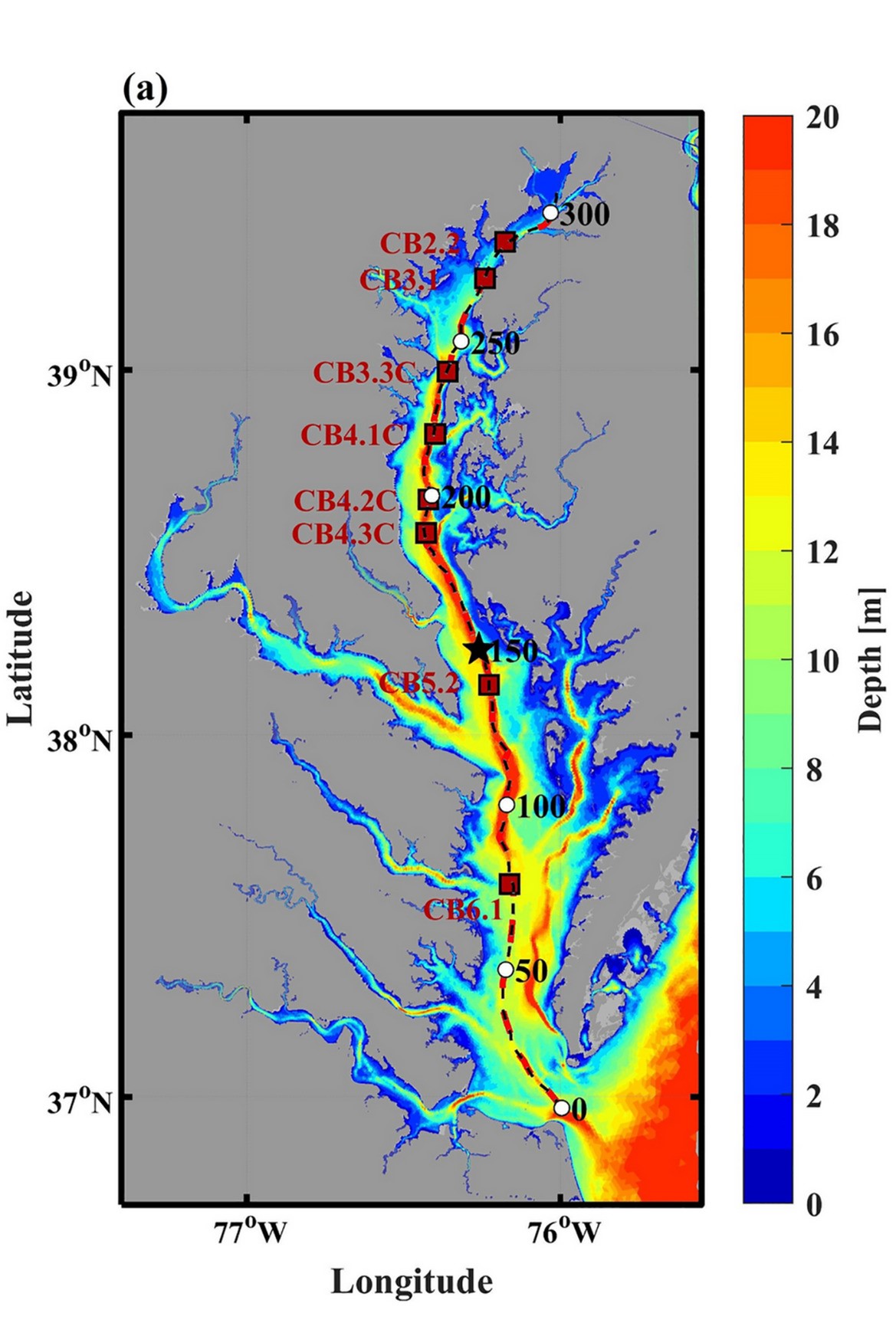 Particle tracking showed that it takes about 3–4 months for the overwintering cells to travel from the lower bay to the mid-bay, but about 6 months for the decaying cells to travel from the mid-bay back to the lower bay. This is because the estuarine circulation is far stronger during the high runoff months of January–May than during the low runoff months of June–December. The distance can be over 200 km each way (Figure 2).

With the peak growth rate around 20°C (68° F) water temperature, May is the optimal time of growth opportunity for P. minimum blooms as phytoplankton assemblages transition from winter–spring diatoms to summer dinoflagellates.

This study demonstrates the feasibility of a unique self-sustaining life strategy of a harmful algal bloom species that relies entirely on the physical transport mechanism. The strategy does not require a remote source of seed populations or a life stage with cysts (resting cells) buried under the sea bed.

Understanding the role of physical transport in conjunction with habitat changes through modeling gives new opportunities to explore the vulnerability for blooms in the future, not only in Chesapeake Bay, but in coastal and estuarine regions worldwide where physical models are available.

The study, conducted by Drs. Ming Li, Fan Zhang, and Patricia M. Glibert, of the University of Maryland Center for Environmental Science, Horn Point Laboratory, is under the auspices of the NCCOS ECOHAB project Development of a Coupled Hydrodynamic-Biogeochemical Model to Predict Prorocentrum minimum and Karlodinium veneficum Blooms in Chesapeake Bay.