NCCOS recently supported a review of the status of marine HAB problems in the U.S., part of a global statistical analysis of harmful algal blooms (HAB) events. The study relies on thirty years (1990–2019) of historical data and trend analysis from an international harmful algal event database (“HAEDAT”) and many other reports. This report presents summaries of the key drivers for bloom dynamics. This is the first-ever effort to quantitatively analyze trends in U.S. marine HAB events.

HABs pose a significant problem in U.S. coastal waters, dating back hundreds of years. The species that cause HABs in the U.S. are as diverse as the habitats in which they occur. Impacts are equally diverse and include multiple human poisoning syndromes associated with the consumption of molluscan and crustacean shellfish, fish, and other marine animals that have accumulated algal toxins. Human exposure to aerosolized or water-borne toxins and dermatological contact with HABs can also cause negative impacts. Other effects include mortalities of fish and wildlife, ecosystem disruption, hypoxia and anoxia from high biomass blooms, and noxious impacts associated with the accumulation and decay of massive microalgal and seaweed blooms.

HAB phenomena in the U.S. encompass one component of the global problem currently being assessed through the GLOBAL HAB Status Report. The U.S. study finds that overall, U.S. HABs are more visible now due to increased spatial monitoring and number of species monitored. Statistically, however, trends of yearly frequency of occurrence in 29 coastal regions of the U.S. and its territories vary amongst the major HAB species and their syndromes. Over the 30 year period occurrence trends either increased or remained unchanged or unclear due to lack of data. Highlights of the study are briefly summarized below (see here for information on species and syndromes):

Ciguatoxin (CTX)
CTX (ciguatoxins) causes Ciguatera Poisoning (CP) (aka Ciguatera Fish Poisoning [CFP]). CTX events caused by Gambierdiscus dinoflagellates have long impacted tropical and subtropical locations in the U.S., but due to a lack of monitoring programs and under-reporting of illnesses, data on these events are not available for time series analysis. Geographic expansion of Gambierdiscus into temperate and non-endemic areas (e.g., northern Gulf of Mexico) is apparent and fostered by ocean warming.

Diarrhetic Shellfish Toxins (DSTs)
DSTs (Okadaic Acid, dinophysistoxin[s] and congeners) cause Diarrhetic Shellfish Poisoning (DSP). The recent emergence of DSTs in the U.S. began along the Gulf Coast in 2008 and expanded to the West and East Coasts, though no significant trend through time is seen since.

Paralytic Shellfish Toxin (PST)
PST (saxitoxin) causes Paralytic Shellfish Poisoning (PSP). Quantitatively, no significant trend is seen for PST events over the study interval, though there is clear evidence of expansion into new regions and the emergence of a species that produces PSTs in Florida, Pyrodinium bahamense.

Other HABs
Since their first occurrence in 1985 in New York, brown tides resulting from high-density blooms of Aureococcus spread south to Delaware, Maryland, and Virginia, while those caused by Aureoumbra spread from the Gulf Coast to the east coast of Florida. Blooms of Margalefidinium polykrikoides (formally Cochlodinium polykrikoides) occurred in four locations in the U.S. from 1921–2001 but appeared in more than 15 U.S. estuaries since then, with ocean warming implicated as a causative factor. Heterosigma akashiwo occurs in the Gulf of Mexico on the East and West coasts, though it is considered harmful predominantly on the West Coast due to its effects on farmed fish (e.g., contamination/death by toxin, reduced/no dissolved oxygen, suffocation by gill clogging). Lack of routine monitoring and changes in the scale of fish aquaculture operations obscure possible trends in national bloom frequency or magnitude. Karenia mikimotoi occurs in many parts of the U.S., from Alaska to Maine, including the Gulf of Mexico. Lack of routine monitoring prevents the identification of national or regional trends.

Research has documented numerous toxic cyanobacteria blooms in all 50 U.S. states, and more recently the transport of cyanotoxins from freshwater systems into marine coastal waters, a potentially significant threat to public and ecosystem health. These events are not yet recorded in HAEDAT, so trends cannot be identified.

Given the strong link between cyanobacteria events and anthropogenic nutrient increases and warm temperatures, however, the scale of this recently discovered HAB impact has likely expanded in recent years and is likely to maintain that trend as global warming and other environmental changes continue.

According to the HAEDAT, U.S. HAB events overall significantly increased over the 30-year study interval (Figure 1, below). Taken together, there is a significant increasing trend in U.S. HAB events. Part of this observed expansion reflects a better realization of the true or historic scale of the problem obscured by inadequate monitoring. Other contributing factors include the dispersion of species to new areas, the discovery of new HAB poisoning syndromes or impacts, and the stimulatory effects of human activities like nutrient pollution, aquaculture expansion, and ocean warming, among others.

One outcome of this multifaceted expansion is that many regions of the U.S. now face a daunting diversity of species and toxins, representing a significant and growing challenge to resource managers and public health officials. Although HAEDAT and other databases are greatly valued, efforts to expand and sustain the collection of data regionally and nationally are crucial. 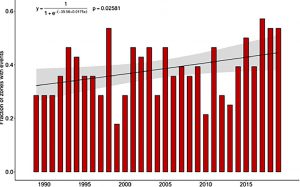 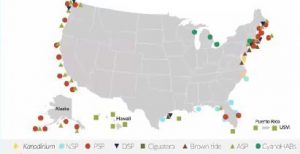