Outlook for Impact of HABs on 2016 Crab Season in California

On August 11, 2016 Dr. Raphael Kudela, with theUniversity of California Santa Cruz, testified on 'Harmful Algal Blooms and Domoic Acid: Latest Forecast and a Look Ahead to the Upcoming Season' to the Joint Committee on Fisheries and Aquaculture of the California Legislature.Kudela discussedthe massive west coast-wide 2015 toxic Pseudo-nitzchia bloom, drawinga strong link between warm water temperatures and such massive blooms.Healso predicted that a warmer eastern Pacific would increase the chance of more large-scale toxic HAB events in the future.

The concentration of domoic acid (DA), a potent neurotoxin, was so high and lasted so long during the event that the entire food web was saturated, leading to toxins in every species of animal tested. Rock and Dungeness crabs remained very toxic for months after the bloom dissipated, resulting in lengthy harvesting bans and severe economic impacts.Although water temperatures in 2016 have not been as high as 2015, they are still well above the long term average. Temperature alone does not lead to these large blooms, but is an important factor along with injection of nutrients from upwelling and runoff. Models and observations suggest that patchy, high DA regions are now occurring. New research connecting model predictions of toxic cells to DA levels in crabs with a one month time lag led to the prediction that by October 2016 there will be high DA in crabs and other organisms in these toxin hot spots if the current trends continue, but that the toxicity will not be as widespread as in 2015. 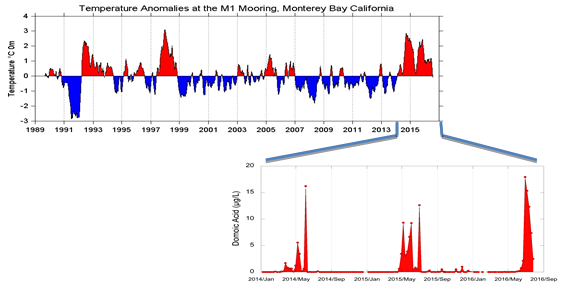 Other speakers described the severe economic impacts of the crab and shellfish closures and discussed ways the state could improve its response to future blooms.

The outlook for 2016 was reported in the local press after the hearing.