Last week, a NOAA-funded investigation of the relatively healthy deep reefs of Pulley Ridge (off the southwest coast of Florida) began its fourth and final expedition. 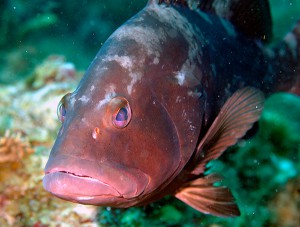 The industrious Red Grouper, a species of interest for this project, establishes complex habitat on the seafloor along Pulley Ridge. It digs pits as much as 5 meters across and 2 meters deep by scooping up sediment in its mouth and depositing it on the rim of the pit. Credit: Don DeMaria.

During the two-week mission, the team will launch a remotely operated vehicle from the University of Miami's R/V F.G. Walton Smith to photograph benthic and fish communities and collect fish and invertebrate samples. The researchers are using the data collected to identify whether Pulley Ridge helps sustain coral reef communities in the Florida Keys and Dry Tortugas or vice versa, and to determine if the area would benefit from further protection. The team presented preliminary results from this project at a recent meeting of the Florida Keys National Marine Sanctuary Advisory Council to inform the council's discussions.

The Coral Ecosystem Connectivity 2015 expedition from Pulley Ridge to the Florida Keys is funded by NOAA's National Centers for Coastal Ocean Science and Office of Ocean Exploration and Research in partnership with NOAA's Office of National Marine Sanctuaries, the National Marine Fisheries Service's Southeast Regional Office, and the Gulf of Mexico Regional Collaboration Team. The project is led by the University of Miami and represents a collaboration of over 35 scientists at 11 different universities. This is the project's fourth and final field season. 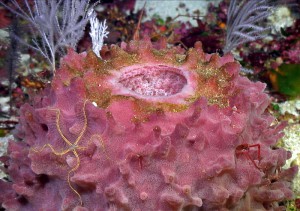 Close-up of a giant barrel sponge, Xestospongia muta, that provides habitat on Pulley Ridge for many creatures, including a squat lobster (right) and a brittle star (left). Credit: Coral Ecosystem Connectivity 2014 Expedition.