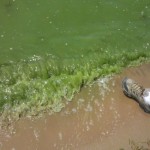 In freshwaters around the world blooms of cyanobacteria (commonly known as blue-green algae) are considered a serious health problem due to their potential to release toxins that can poison and kill humans, pets and livestock. What controls the growth of these cyanobacteria and their associated toxicity? New NCCOS-sponsored research shows how harmful cyanobacteria blooms in freshwater are formed and how these blooms can become toxic.

The results of this study were published July 23, 2013 in the open-access online journal PLoS One Global Transcriptional Responses of the Toxic Cyanobacterium, Microcystis aeruginosa, to Nitrogen Stress, Phosphorus Stress, and Growth on Organic Matter. The research was funded by the NCCOS Ecology and Oceanography of Harmful Algal Blooms (ECOHAB) Program. For more information, contact Marc.Suddleson@noaa.gov.

Florida's HAB Problem: Why are HABs so Prevalent in Florida Waters?