NOAA Fisheries announced it has mobilized extra scientists to join a fisheries survey aboard the NOAA Ship Bell M. Shimada charting an extensive harmful algal bloom (HAB) that spans much of the West Coast. An NCCOS sponsored Ecology and Oceanography of Harmful Algal Blooms (ECOHAB) project in southern and central California comparing coastal HAB 'hot spots' analyzes water samples collected during the survey for algae and toxins. Stretching from the Central California Coast north to Washington and possibly Alaska, the HAB event involves some of the highest concentrations of the algal toxin domoic acid observed in the last decade in plankton and plankton-eating fish. Harvesting and fishing bans for molluscan shellfish, crabs, and some fish have been instituted along much of the West Coast. 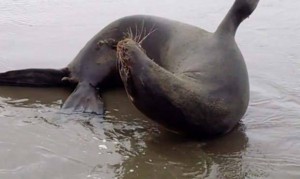 A sea lion experiences seizures, caused by eating fish that in turn feed on the toxic algae. Credit: Washington Department of Fish and Wildlife.

The researchers test samples for the diatom alga Pseudo-nitzchia and the potent neurotoxin it produces, domoic acid (DA). When shellfish consume toxic Pseudo-nitzschia, DA accumulates in their tissue. Shellfish harvesting bans protect human consumers from Amnesic Shellfish Poisoning caused by DA. Sardines, anchovy and other fish that feed on the algae can also accumulate domoic acid, in turn poisoning birds and sea lions that feed on them. 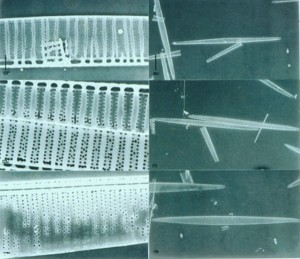 The NCCOS 'hot spots' project is a $4M, five year effort determining why HAB hot spots exist and how human influences, such as nutrient runoff, and natural upwelling of deep ocean water interact to cause blooms. With a focus primarily on toxic Pseudo-nitzschia, it also monitors for toxic Alexandrium catenella and other HABs that commonly occur in the region. The purpose is to improve monitoring and develop predictive models for the early warning of HABs and their impacts as part of a larger effort by NOAA to develop ecological forecasts.