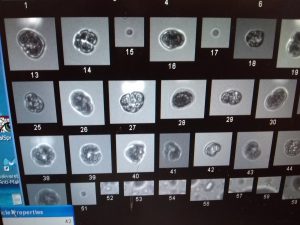 NOAA’s National Centers for Coastal Ocean Science has provided a HAB Event Response award of $28,000 to enhance a  NOAA-led South Florida Ecosystems research cruise aboard the R/V Walton Smith to sample the ongoing red tide and ecosystem impacts on the Southwest Florida shelf. These cruises have been investigating coastal water quality in south Florida every other month since the late 1990s. From October 12-19, 2018 NOAA and its Florida partners will be assessing bloom conditions post-Hurricane Michael.

The objectives of the research cruise are

Samples will be collected around the Fort Myers, Sanibel, and Pine Island areas to measure cells and toxins to better understand changes in the severity, duration, and location of the ongoing red tide along the southwest coast of Florida. Key fish species will be collected and tested for brevetoxins to determine the impacts of the red tide on key fisheries species.

Blooms of the red tide alga, Karenia brevis, produce brevetoxins, which kill fish, turtles and marine mammals, and make shellfish dangerous to eat. The toxins can become airborne through wave action and may cause respiratory irritation for people on or near beaches. The current red tide originated offshore of Southwest Florida in October 2017. It intensified and moved closer to shore in June 2018, taking a toll on marine animals along Florida’s Southwest coast, including fish, sea turtles, birds, dolphins, and manatees, with multi-million dollar economic impacts to the shellfish and tourism industries. During September and October 2018, K. brevis algae were observed in patchy blooms along the Northwest, Southeast, and Atlantic Florida coasts.