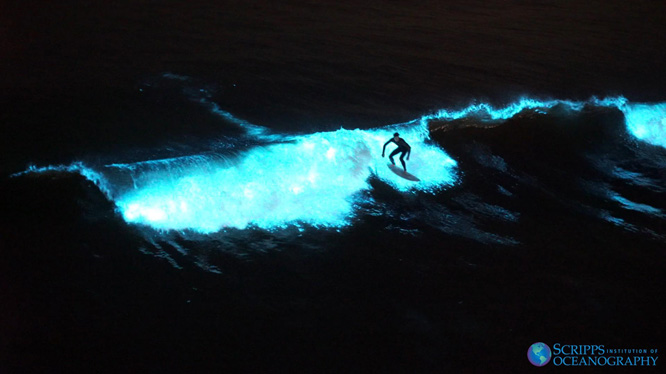 A surfer rides a bioluminescent wave from a bloom of L. polyedra. Credit: Dr. Michael Latz, Scripps Institution of Oceanography.

NOAA’s National Centers for Coastal Ocean Science awarded $16,000 in Harmful Algal Bloom Event Response funding for researchers at Scripps Institution of Oceanography and the Southern California Coastal Ocean Observing System (SCCOOS) to investigate a bioluminescent algal bloom and co-occurrence of low dissolved oxygen off the coast of Southern California, from the Channel Islands in California to Cedros Island in Mexico. The NCCOS Harmful Algal Bloom Monitoring System is also providing satellite remote sensing images of the event to determine the extent of the bloom of Lingulodinium polyedra (formerly Lingulodinium polyedrum).

The bloom was first detected in late March 2020 by an Imaging FlowCytobot (IFCB) at a mooring near Del Mar, California. The IFCB combines flow cytometric and video technology to capture high resolution images of suspended particles. A month later, weekly sampling at Scripps Pier by the California Harmful Algal Bloom Monitoring and Alert Program (HABMAP) and SCCOOS yielded the highest abundance of L. polyedra ever recorded over a 37-year period.

The bloom lasted at least two months, creating spectacular shows of bioluminescence at local beaches, but was followed by a sudden appearance of dead fish, crab, mussels, and invertebrates along San Diego, Orange County, and northern Baja coasts. Aquaculture facilities and research aquaria that used seawater from piers near bloom-impacted locations also experienced significant losses of stocks and specimens.

The cause of these massive die-offs is still unknown, and might be attributed to low oxygen conditions from the prolonged bloom, toxin produced by L. polyedra, or other bacterial byproducts that may form as the bloom degrades. L. polyedra produces yessotoxin, which can bioaccumulate in many organisms. To date, toxicological data on the effects of yessotoxin are largely incomplete. However, researchers ultimately attributed mortalities of abalone during an L. polyedra bloom in 2011 in northern California to yessotoxin.

Surfers and beachgoers in the region reported itching, development of hives, and respiratory hypersensitivity during the 2020 L. polyedra bloom. There is concern that blooms may increase yessotoxin production (and possibly aerosolization of the toxin) or bacterial byproducts that may cause irritation, allergic response, or toxic conditions for humans and marine life. However, the chemical nature of the compounds produced by L. polyedra that may induce allergic reactions are unknown. 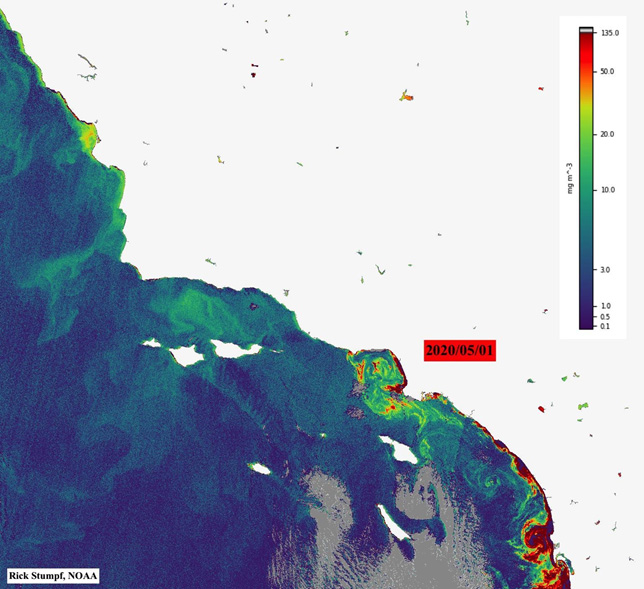 The award supports the analysis of environmental and wildlife samples for the presence and bioaccumulation of yessotoxins, as well as investigation into the causes of the animal die-off and public health implications. Scripps researchers will work closely with the Southern California Coastal Water Research Program (SCCWRP) to monitor the severity of the bloom and the potential public health impacts. Data produced by this project will better describe bloom dynamics, the causes of animal mortality, and will be included in the SCCOOS Spring 2020 Red Tide Bulletin, which is distributed widely to scientists, stakeholders, and the public.