NOAA’s NCCOS’ HAB Event Response Program is providing $10,045 in Fiscal Year 2018 funding for a project led by the Sanibel Captiva Conservation Foundation (SCCF) that aims to learn more about sea turtle diets and how the toxicity of their food can impact turtle mortality rates during red tides. 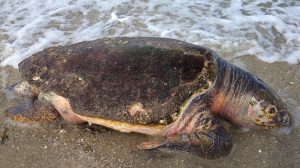 A bloom of the red tide organism Karenia brevis, which produces brevetoxins, has waxed and waned off the coast of Southwest Florida since October 2017. Humans and animals may be exposed to brevetoxins by eating contaminated food or by breathing in aerosolized (airborne) toxins. The current bloom has had severe economic effects across the region, affecting tourism and the seafood industry. The bloom also has caused extensive mortalities in sea turtles and other marine life. Sea turtle strandings are especially high during K. brevis red tides, and many turtles that have stranded have tested positive for brevetoxins.

This project will explore connections between sea turtle mortalities and brevetoxins in partially digested food sources – including seagrass leaves, shellfish, fish, or sponges – found in the turtles’ digestive system. The data collected will inform our understanding of how turtles become sick when exposed to brevetoxins through the foods they eat, and how pervasive the toxins are in coastal food webs important to sea turtles. Managers may use these data to determine if altering prey availability through managed harvests could reduce the impacts of brevetoxin on sea turtles.

The NCCOS HAB Event Response program will fund screening tests and confirmatory analytical analyses to determine the presence and levels of brevetoxins in gut contents and tissues in samples collected from stranded turtles and their digested prey. SCCF staff will work with the NOAA NCCOS Analytical Response Team, the Conservancy of Southwest Florida, and the Clinic for the Rehabilitation of Wildlife.

Have your say on harmful algae in Lake Erie | Windsor Star