Scientists from NCCOS and Woods Hole Oceanographic Institution embark today aboard NOAA's research ship, the Okeanos Explorer, on a nine-day sediment sampling mission in the Gulf of Maine. Researchers will examine sediment cores for the presence of cysts of the harmful alga Alexandrium fundyense to improve forecasting of harmful algal bloom (HAB) events along the New England coast in 2015.

Alexandrium, commonly known as red tide, has both a vegetative stage, where cells grow in surface waters, usually in the late spring and summer, and seed-like cysts that overwinter in sediments on the bottom. Forecasts of the extent and severity of Alexandrium blooms depend on a map of the alga's cysts in Gulf of Maine sediments and computer models simulating a range of bloom scenarios based on previous years' ocean conditions. 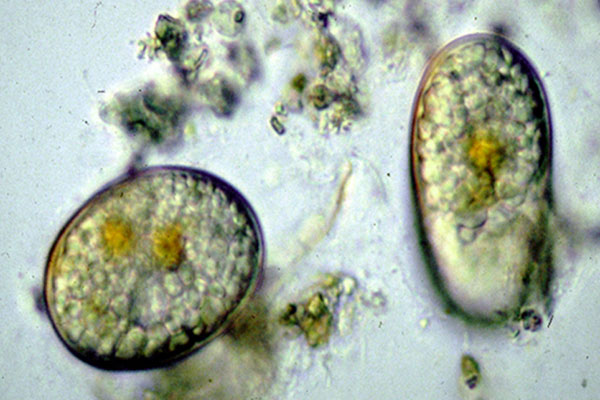 The Gulf of Maine and its adjacent southern New England shelf have extensive shellfish resources, large portions of which are frequently contaminated with toxins produced by Alexandrium, known to cause paralytic shellfish poisoning in humans when consumed. State managers use the HAB forecasts to monitor the Alexandrium toxins, ensuring shellfish are safe for human consumption. 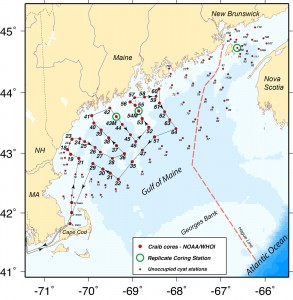 Proposed sampling sites for the 2014 HAB-cyst sampling cruise in the Gulf of Maine. Credit: NOAA.

Because environmental factors and oceanographic conditions regulate transformations between the cyst and vegetative stages, they also contribute to the magnitude, frequency, and location of toxin-producing blooms. Next year, nutrient, temperature, and salinity sensors, and a network of robotic HAB sensors will help determine the oceanographic conditions that develop during the 2015 bloom season and help compare actualAlexandrium concentrations to those predicted by the forecast.