NOAA’s National Centers for Coastal Ocean Science (NCCOS) provided a harmful algal bloom (HAB) Event Response award of $15,482 to the University of Florida, Florida’s Clinic for the Rehabilitation of Wildlife (CROW), the Sanibel Captiva Conservation Foundation, and the Florida Fish and Wildlife Conservation Commission Fish and Wildlife Research Institute (FWRI). This funding will support efforts to determine if predatory seabirds experiencing brevetoxicosis can be leveraged as early warning ‘sentinels’ for red tide events along the Florida coast. 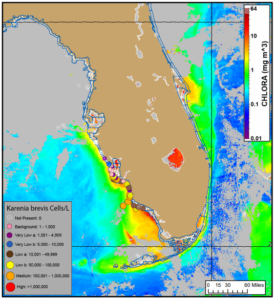 A red tide event caused by the organism Karenia brevis, which produces brevetoxin, persists off the coast of Southwest Florida. Bloom conditions improved during late January and early February, however an unusually high number of juvenile royal terns (Thalasseus maximus) and double-crested cormorants (Phalacrocorax auritus) were found dead or displaying neurological impairment indicative of brevetoxicosis. Preliminary samples confirmed that brevetoxins were found at levels equal to or higher than those reported for seabirds previously diagnosed with brevetoxicosis.

Cormorants and royal terns feed offshore, at depths of up to 8 meters (24 feet) and 2 meters (7 feet), respectively. Scientists hypothesize that these birds consumed prey fish impacted by red tide cells located below the ocean's surface, before the bloom could be detected by satellites. At the time these birds were collected, high concentrations of K. brevis were not detected in surface waters assessed via water sampling or remote sensing. However, by mid February 2021, water samples revealed bloom concentrations of K. brevis near Sanibel Island. The birds may serve as ‘sentinel’ species for blooms brewing beneath the ocean's surface before the red tide can be detected by current observing methods. The adverse impact this red tide event has had on young, fish-eating seabirds presents an opportunity to evaluate brevetoxin bioaccumulation in these potential ‘sentinel’ species and their prey. 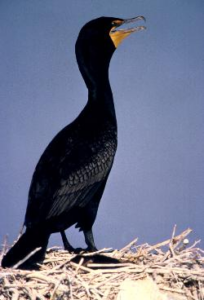 This funding supports analysis of bird and prey fish samples for brevetoxins and stable isotopes. The results, which will determine whether these species can be reliably leveraged as sentinels for soon-to-emerge blooms, will be shared with regional partners who oversee red tide water quality sampling efforts, remote sensing detection efforts (NOAA HAB monitoring and CoastWatch programs), and wildlife rehabilitation and management efforts. Findings from this work will also inform when and where subsurface and surface water sampling and detection efforts should be focused in the future.

For more information about the Event Response, contact marykate.rogener@noaa.gov. 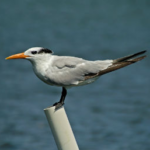 A double-crested cormorant (top) and a royal tern. Credit: US Fish and Wildlife Service