The Bering and Chukchi Seas are experiencing unusually warm ocean temperatures, which may increase the likelihood of harmful algal blooms (HABs). Previous reports of marine mammal exposure to HAB toxins in the Bering Sea, and of the presence of Alexandrium cysts, cells, and toxins in Arctic waters confirm the presence of HAB species in this region. These factors provide cause to investigate the role of HAB toxins in the current multispecies mortality event that is taking place in the north Bering Strait and Norton Sound regions. Mortalities include birds, fish, krill, clams, a bowhead whale, a minke whale, ice seals, and walruses. 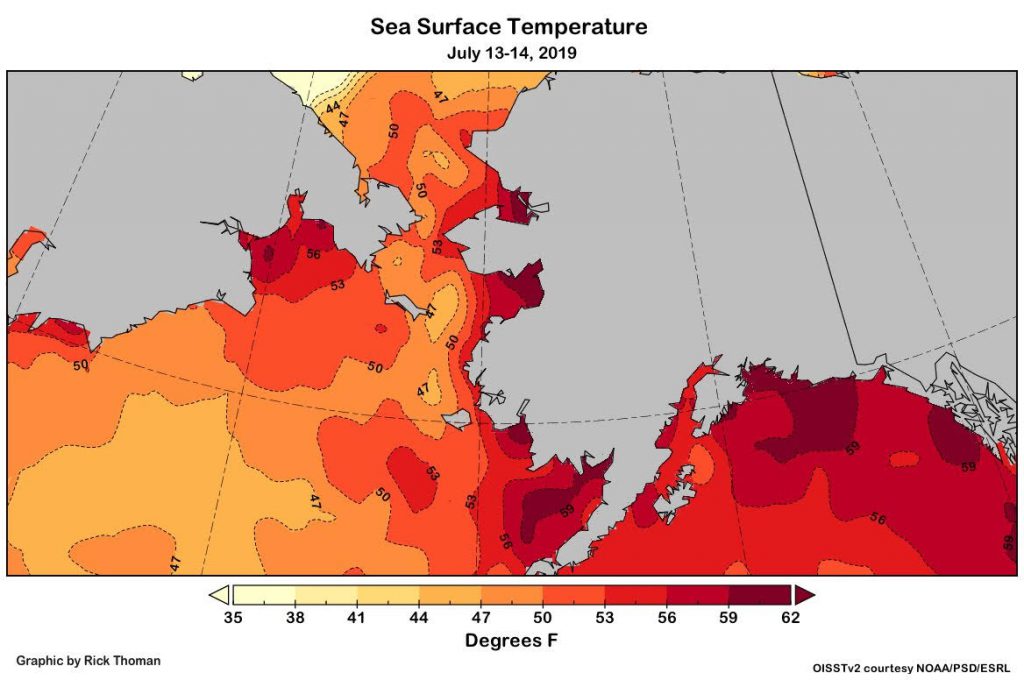 Sea surface temperatures in the northern Bering Sea are unusually warm, which may increase the likelihood of harmful algal blooms in this region. Graphic by Rick Thoman, University of Alaska Fairbanks.

This award supports environmental and wildlife sample collection, and analyses for detection of algal toxins that may be harmful to wildlife and people in Alaska. NOAA scientists will work directly with regional partners, including Alaska Sea Grant and the Alaska Harmful Algal Bloom Network, and local communities to communicate results from this emergency response. Food security is a major concern in Alaskan Native communities, where subsistence harvests comprise seals, sea lions, walruses and whales. Subsistence hunting is critical for nutrition in Alaskan Native communities.