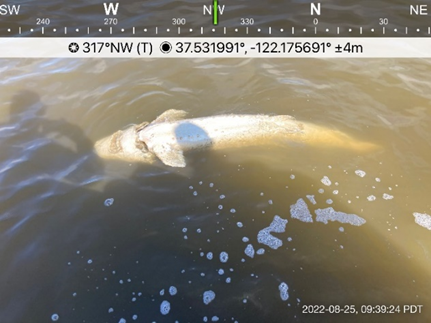 First reports of discolored red or brown water occurred in mid-late July 2022 around Alameda Estuary. California Department of Public Health collected samples and was the first to confirm the organism as H. akashiwo. Scientists at the USGS- CAWSC and the SFEI were tracking the event using remote sensing products. In early August, evidence emerged that the bloom was expanding into the open-bay waters of South Bay San Francisco Bay. By the end of August, Sentinel-3 satellite imagery (provided by NOAA) and field observations found that the bloom had extended across the entire South Bay. At this same time, observations from the public of dead fish washing on shore began to be reported, with over 200 reports of fish mortalities distributed through the Bay. The dead fish were made up of a wide range of taxa, including sturgeon, striped bass, leopard sharks, bat rays, and numerous smaller species. There were concerns that fish impacts could eventually expand into the low-salinity zone of Suisun Bay as this region provides important habitat to the federally endangered Delta Smelt, and is an important stop-over habitat for migrating salmonids.

Around August 29 the bloom began to decline. Chlorophyll levels from field surveys on August 31 and September 1 were near ambient pre-bloom concentrations. Notably, dissolved oxygen concentrations had decreased in the South Bay (Oakland to San Jose), so the negative impacts of the bloom continued to persist even after the bloom had subsided. Oxygen levels eventually returned to pre-bloom concentrations in early September. This was the first low dissolved oxygen event to impact an entire sub embayment (South Bay) since monitoring began in the 1970s.

The cause of the massive die off is still unknown but may be attributed to toxins produced by H. akashiwo, or low dissolved oxygen concentrations as the high-biomass  bloom dies and decomposes. To date, the mechanism of H. akashiwo toxicity is unknown although a number of potential mechanisms have been proposed. These mechanisms are difficult to study because they are complex and some toxic compounds may be ephemeral. The California Interagency HAB Illness workgroup has received two reports of human illness possibly related to the SF Bay marine HAB (H. akashiwo) event. Symptoms occurred following water contact, and the Illness workgroup is investigating the potential connection.

USGS and SFEI researchers are using NCCOS HAB Event Response funding to analyze water quality, genetic, and microscopy samples collected to measure and track the bloom development and expansion. These data will be compared with long term monitoring data to identify changing conditions that might have led to this large bloom. 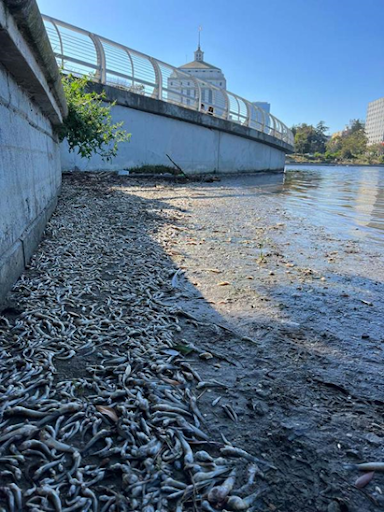 Additionally, NCCOS provided remotely sensed images of the bloom that the State Water Resources Control Board (CA Water Boards) used to track the spatial extent as it expanded across the San Francisco Bay. These images were published to expedite data sharing among responding agencies and organizations. The product was posted on the HAB Reports web page that centralizes information on incident reports and monitoring data from partner agencies including USGS. The remotely sensed information also helped prioritize outreach to local health agencies in the area of impact and support targeted incident response and beach advisories.

The NCCOS HAB Event Response Program provides immediate assistance to help federal, state, and local officials manage events and advance the understanding of HABs as they occur. The NCCOS Harmful Algal Bloom Monitoring System routinely delivers near real-time products for use in locating, monitoring and quantifying algal blooms in coastal and lake regions of the US. For more information about the Event Response, contact marykate.rogener@noaa.gov, and for more information about the satellite remote sensing images, contact Richard.Stumpf@noaa.gov.

Report: A Baseline Assessment of the Ecological Resources of Jobos Bay, Puerto Rico