The HAB-OG is designed to be an informal community-based coalition aimed at bolstering scientific collaboration and information/resource sharing for HAB observing system operators, data users and stakeholders, technology manufacturers, academia, and government agencies.

Over one hundred and sixty-five HAB observing experts, sensor manufacturers, data managers, and others from across the nation, as well as a few international participants, were welcomed by Josie Quintrell (Director, IOOS Association), Dr. Steven Thur (Director, NCCOS) and Carl Gouldman (Director, U.S. IOOS Office).

Dr. Gregory Doucette (NCCOS) provided an overview of efforts to capture current NOAA strengths, define gaps, and identify potential partners as defined by the national NHABON Framework. He also highlighted the successful engagement of IOOS Regional Associations (RAs) and planned implementation steps outlined in the recently published NHABON Implementation Strategy. After describing increased Congressional interest in HABs, which led to appropriations for HAB research and Observing Pilot Projects in FY 19 and 20, he outlined the seven new pilot projects. The presentation concluded with a call for enhancing and expanding HAB observing partnerships within and between regions. The IOOS RAs playing a pivotal and growing role in these efforts will be key to the future success of a NHABON. 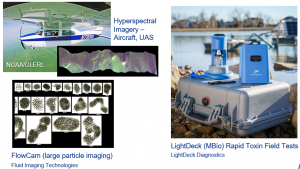 Following a lively Q&A session, Dr. Quay Dortch (NCCOS) and Dr. Clarissa Anderson, (SCCOOS Director), the HAB-OG Steering Committee co-chairs, discussed how the HAB-OG was established, its structure, and how the group is envisioned to advance development and use of a NHABON. Attendees were encouraged to become members of the HAB-OG, play an active role in the group’s activities, and submit ideas for future webinar topics.

Oysters can handle some, but not all pollution we dump into the nation's estuaries | al.com