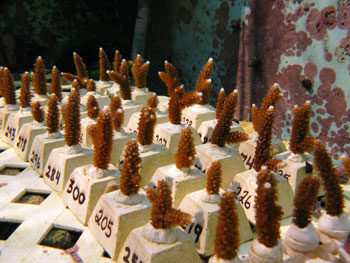 Staghorn coral, Acropora cervicornis, a former dominant reef building species in the Caribbean, provides habitat to thousands of invertebrate and fish species. Due to its dramatic decline throughout its range over the last several decades, the Federal government added A. cervicornis to the threatened species list under the Endangered Species Act. Innovative methods are needed to help restore this species to its former abundance and distribution.

Coral nurseries are one way conservation groups and researchers are exploring to try to increase reef resiliency by promoting sexual reproduction and enhancing local genetic diversity. Nursery grown corals are fragmented and grown out again to rapidly multiply the number of corals available for out-planting. The goal is to return the fragments to natural reefs for restoration.

NCCOSpresently supports Dr. Alison Moulding, of the National Coral Reef Institute, who studies the use of juveniles derived from larvae and coral fragments maintained in a land-based nursery for reef restoration. Currently, coral cultivators mostly use offshore open water nurseries for restoration, but each nursery type has associated advantages and disadvantages. Offshore nursery corals experience the same environmental stressors, such as extreme temperatures and predators, as corals in the wild.

Less often used land -based nurseries have the advantage of maintaining corals in a more controlled environment, but it is unknown how the corals will perform when placed back into the wild. Direct comparison of coral performance in the two nursery types has not been studied. In May of 2010 Dr. Moulding began a project comparing the performance of fragments of the threatened staghorn coral in both land-based nurseries and offshore open water nurseries.

By the end of 2010 corals in the offshore nursery were thriving and ready to be fragmented. Corals in the land-based lab nursery had a slower start, but growth rates increased after enhancements were made to lighting and water quality. In January of 2011 researchers doubled the number of A. cervicornis colonies in the land-based system from 50 to 100 by taking clippings from colonies in the offshore nursery. Dr. Moulding and her research assistants Keri O'Neil and Abby Renegar await final stages of the project in which fragments from both nurseries will be out-planted to reef sites off Ft. Lauderdale. Dr. Moulding's team hopes results will show land-based nursery corals provide a viable additional source of coral fragments for restoration activities.