The ongoing West Coast harmful algal bloom (HAB) highlights the need for improved regional monitoring of toxic algae in the California Current along the coasts of California, Oregon, and Washington. A first of its kind Oregon HAB monitoring and research pilot project demonstrated a viable strategy to address state management needs and fill a critical data gap for a future operational West Coast HAB monitoring system. 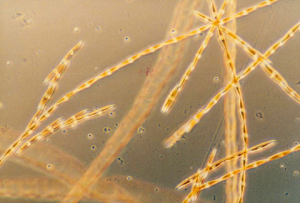 Pseudo-nitzschia is a marine alga that can cause domoic acid poisoning. Credit NOAA

As in other parts of the world, HAB events along the West Coast of the United States are increasing and imposing threats to coastal economies, ecosystems, and public health. Two of the major algal toxins of interest along the West Coast are domoic acid (DA), produced by some species of the diatom algal genus Pseudo-nitzschia, and saxitoxins (STX) that are produced by certain dinoflagellate algae, including some species of Alexandrium. For these toxins and algae, the Oregon coast has been understudied compared to other regions and other West Coast states. 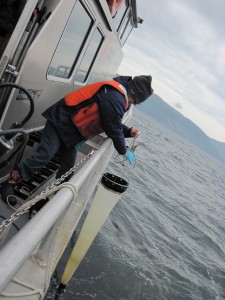 Collection of phytoplankton from the water column by a cruise volunteer aboard the R/V Elakha during a MOCHA research cruise off the Oregon coast. Credit M. McKibben

Both historical shellfish toxin databases (decades long) and more detailed case-study observations of two individual HAB events that occurred during the MOCHA project were compiled to provide the first detailed overview of HAB occurrence in the Oregon coastal region. The case studies investigated the following questions by combining shipboard and coastal HAB monitoring data with concurrent wind and sea surface temperature (SST) data: (1) how informative are HAB cell counts at the coast as a proxy of HAB events; (2) what was the spatial extent of these HAB events offshore; (3) what can be learned regarding HAB initiation and movement from pairing time series wind and SST proxies with HAB observations? 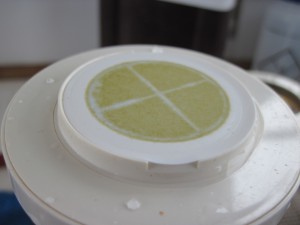 Filtered from a surface ocean water sample during a MOCHA research cruise, the phytoplankton (greenish color) collected on this filter will be tested for levels of particulate domoic acid. Credit M. McKibben

The project scientists identified a number of parameters related to HAB formation that can be utilized as precursors of an increased likelihood of HAB events: cell counts of HAB-forming dinoflagellates, concentrations of DA, and downwelling/relaxation events that facilitate onshore transport of HAB species or toxins detected offshore via ship or automated mooring. Additionally, MOCHA research has found warm phases of the Pacific Decadal Oscillation to be a reliable proxy of DA events. All of these measurements should be considered in any STX- or DA-monitoring program aimed at early detection in the California Current regime.

Learn more about the MOCHA project and their results in the journal Harmful Algae .

Nate in My Front Yard, Sea-level Rise in My Office